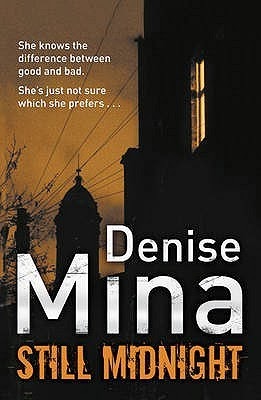 This novel features a cast of tortured characters, some good, some bad, and others somewhere in between. It opens when two relatively incompetent thugs named Pat and Eddy burst into a home in Glasgow, intent on kidnapping some guy named Bob. But there’s no Bob there, and the panicked family in the home insists that they don’t know anyone named Bob. The thugs refuse to believe them and, since Bob isn’t available, they kidnap the family’s elderly father instead, this after Pat accidentally shoots the family’s daughter in the hand. Pat and Eddie promise to bring the father back as soon as the family forks over two million pounds in ransom.

By rights, the case should be assigned to DI Alex Morrow, but for any number of flimsy reasons, her sexist, dimwitted boss assigns the case to Morrow’s sexist, dimwitted associate, a guy named Bannerman, and then instructs Morrow to follow Bannerman’s lead on the case. Morrow is not a very pleasant person to begin with and she’s deeply troubled herself for reasons we do not learn until very late in the book. She’s also the smartest cop on the beat, with a big mouth and a quick temper. Needless to say, this will not sit very well with her.
The crime and the case seem screwed up from the start. The kidnap victim is a Ugandan immigrant who owns a convenience store. The family is middle class at best and has only about forty thousand pounds in the bank—a far cry from the two million that the kidnappers have demanded. At first glance, it appears that Pat and Eddy have attacked the wrong home, but acting on her own initiative, Morrow discovers an important clue that suggests that there’s more to this situation than meets the eye.
The story is told from the viewpoints of several different characters and the bulk of it is a psychological study of them and their various problems. The investigation of the kidnapping proceeds at a very slow pace and, while it appears that other crimes may be involved, it’s hard for Morrow or anyone else to get a handle on them.
I enjoyed this book up to a point, but it didn’t work for me as much as I had hoped. For starters, I had great difficulty warming up to any of the characters. It was hard to feel any real sympathy for the family that was victimized, because they all seemed to be a bunch of losers. The sole exception was the kidnapped father who was my favorite character in the book. Whenever the story shifted to his point of view, I found it much more interesting.

I also had trouble liking Alex Morrow who was simply too abrasive to engender any empathy even when, at long last, I learned what her problem was. By then, I was completely out of patience with her and it was too late for me to reverse my opinion of her. Additionally, the crimes at the heart of the story, didn’t seem all that substantial, and, save for the hope that the kidnapped father would be saved, it didn’t seem all that important that the crimes be solved. Finally, there’s a love story in the book that I found totally implausible and could not buy into.
Mina is best at setting the scene, and her descriptions of Glasgow and the Scottish countryside are first-rate. She also does a very good job of creating and fleshing out these characters; I only wish that she had created at least one or two that I could have really cared about.
Posted by James L. Thane at 9:12 AM No comments:

What Is Pushed Down Will Rise Up

The Moon is Down by John Steinbeck
Reviewed by Jason Koivu
My rating: 4 of 5 stars

Short and bitter sweet, The Moon is Down shows what becomes of docile countryfolk when they are invaded and subjugated.

Not sure what to expect from this lesser known work by Steinbeck, my first impression after a few pages was that I was in for a light comedy, a sort of Catch-22 anti-war declaration, apparently with silly citizens and gullible army officers acting out a daffy pre-"Hogan's Heroes" farce.

But then it turned serious and dark, and actually hopeful. There are small heroes, tiny victories. The struggle is not valiant. There are no action-packed depictions. It is furtive. Victory over their oppressors is implied.

Aspects of The Moon is Down had a deja vu familiarity about them and then one particular scene jarred my memory and sent me back 30 years or more to a TV version of All Quiet on the Western Front. In it actor Richard Thomas (aka "John Boy") plays a German. I think in the early 80s he was trying to get away from his good-guy Waltons persona. Playing a Nazi would do it. Well anyway, the scene in question is not, to my recollection, from All Quiet..., but rather from this book. I hope Steinbeck got some credit.