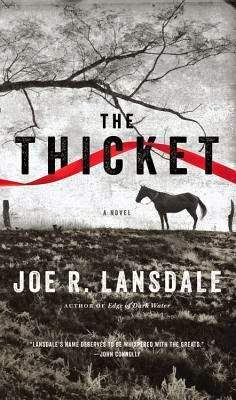 
By turns violent and hilarious, The Thicket is Joe R. Lansdale in peak form.

The book is set in East Texas, early in the Twentieth century, just as the oil boom is reaching that area. Sadly, a smallpox epidemic has swept through the region, and sixteen-year-old Jack Parker and his fourteen-year-old sister, Lula have lost their parents to the disease.

In the company of their grandfather, the children are leaving Texas to live with a relative in Kansas. But the journey has barely begun when a group of savage bank-robbing outlaws kills the grandfather and abducts Lula. Jack runs to the law, but the sheriff has been murdered; the deputy has been frightened into resigning, and so Jack his left to his own devices if he is to rescue his sister.

He teams up with a group of accomplices that only the mind of Joe R. Lansdale could conceive. They include a bounty-hunting midget, an alcoholic grave digger who keeps a feral pig as a pet, and Jimmie Sue, a prostitute who winds up sweet on young Jack. The villains they are pursuing are as dark and amoral as anyone could imagine, and Jack is constantly reminded by his new-found friends that even if they do recover Lula, she will doubtless have been very ill-used in the meantime. To say that the author has created a number of memorable characters here would be the understatement of the year.

The manhunt takes a number of twists and turns, and the story, which is vaguely reminiscent of True Grit, rolls along without the slightest boring moment to a smashing climax. From start to finish, it's a true Lansdale epic that will appeal to any of his fans, old or new.
Posted by James L. Thane at 10:39 AM No comments:

A Guidebook For Financially Responsible Hipsters

Official Price Guide to Records by Jerry Osborne
Reviewed by Jason Koivu
My rating: 4 of 5 stars

Indispensable reference for the record collector! When I owned a used cd shop, I carried albums and so this book came in very handy, keeping me from occasionally underselling a gem. I think my patrons would've loved to have seen this book burned.

Regardless of genre, nearly everything in the English language under the sun committed to vinyl is listed from A to Z. First the artist's name appears in bold. Under that are sections for singles and LPs. In each section the record company's label is given with the years the artist was under contract with them, and then there's a price range for the average value of the records produced during that time for that label. In special cases the information may be broken down further. Such is often the case with particularly well selling singles or rarities. And then occasionally there will be a slight bit of extra information, perhaps about a record's certain peculiarity or other associated acts the artist performed with/as.

However, extra information is kept to a minimum, after all, Osborne had a lot of records to get through and that would take up a lot of space. As such, while the book has just about every imaginable album from the days when records were king, it certainly doesn't contain everything. Yeah, you can find '80s stuff like The Smiths or even some early hardcore like Husker Du, but all those punks and emo kids of the early to mid-90s putting out the 7"s? They're on their own.

It's been fun going through my own sizable collection to see if I've got anything valuable. For the better part of a year I was convinced I had a $20,000 Beatles LP. Deep research and magnifying-glass-precise inspection unveiled its significantly lower value. When I figured it out I said, "fuck," loudly.

A Suspect Title, But A Great Kids Book!

"I'm not interested in your Shitty Shitty Gang Bang," is essentially what I told my bestbud back in elementary school when he was trying with all his ernest might to make me see the light and enjoy the wholesome, family-fun goodness that is this book. This was at a time when he was listening to Weird Al and I was learning how to bang my head to Quiet Riot.

Basically this book is made up of a handful of short stories cobbled together in linear fashion so that they read like one continuous novel. That is one of the reasons I hesitate to give this a full 5 stars. That and the plot is not always as riveting as it could be. Even looking at it from the perspective of my younger self, I know at no age through out my life would I have been 100% satisfied with the ease with which the Potts, that enthusiastic family of wackos who own Chitty Chitty Bang Bang, get out of pickles and tight jams. The deus ex machina of a magic car makes it all too easy.

Nonetheless, these are fun tales and I think in a year or two I may attempt reading them to my young niece, who will no doubt say to me, "I'm not interested in your Shitty Shitty Gang Bang."