Dismas Hardy Lures Abe Glitsky Out of Retirement and into Trouble 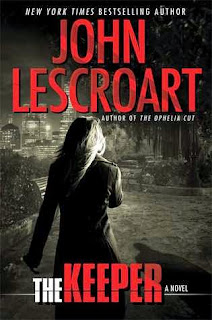 I've long been a fan of John Lescroart's series featuring San Francisco lawyer Dismas Hardy and Homicide Inspector Abe Glitsky, and so it's always a treat to open a new book in the series. Glitsky has recently been forced to resign from his position as head of the Homicide department and is at loose ends. Feeling like he's too young to be retired, he's spending his days reading, watching television, and generally being bored as hell.

On the night before Thanksgiving, Hal Chase, who is a guard at the jail run by the county sheriff, goes out to the airport to pick up his brother who's flying in for the holiday. When the two men return to the Chase house, they find Hal's two young children in bed asleep. Hal's wife, Katie, is nowhere to be found and a few drops of blood on the floor suggest that she has been the victim of foul play.

Although this begins as a missing persons case, it quickly becomes a homicide investigation, even though as yet, Katie's body has not been found. The most logical suspect in such cases is always the surviving spouse and the detectives are strongly suspicious of Hal Chase from the beginning. There were serious problems in the marriage and while Hal has something of an alibi, it's not air tight.

As a sheriff's deputy, Chase is no dummy when it comes to this sort of thing and he quickly realizes that he needs a very good lawyer. His wife had been in therapy with Dismas Hardy's wife, Frannie, and so Chase asks Hardy to represent him. Shortly thereafter, Katie Chase's body is discovered in a wooded area near their home and Hal finds himself in jail, indicted by a grand jury for the murder.

Wyatt Hunt, the P.I. that Hardy usually relies on, is out of town for a while and so Hardy appeals to Abe Glitsky to investigate the case for him. Glitsky agrees, and what initially appeared to have been a relatively simple case soon turns into something much more complex and seriously dangerous for a lot of the parties involved, Glitsky included.

While Glitsky has played a prominent role in all of the books in this series, Harding has always been the principal character, usually defending someone that Glitsky's homicide department has charge with a killing . There's usually a lot of great courtroom dramatics, and these are the things I like best about the series. In this book, though, Glitsky is really on center stage and there are no court room scenes.

It's a fun read; it's well-plotted and there's a lot of great banter among the characters, which is another attractive hallmark of the series. I enjoyed the book very much, and it should appeal to large numbers of crime fiction fans, whether they are familiar with the series or not. But as far as favorites go, this is one that will fall into the middle ranks of the books in this series for me, simply because I favor the books in which I can watch Hardy at work in the court room.
Posted by James L. Thane at 10:27 AM No comments:

I Smell A Rat...and It Stinks

The Stainless Steel Rat Returns by Harry Harrison
Reviewed by Jason Koivu
My rating: 1 of 5 stars

Ever pick up a book you're in the middle of and start reading it just to finish the fucker? That's where I was at with this. It's a cold, hateful place...

The Stain Steel Rat, this sort of zany James Bond in outer space action/comedy series spanned about 50 years. There were decade-long gaps between books. Writers' styles can change over time. I get that and I'm willing to except change. Maybe a character unintentionally evolves. That's fine. I'll roll with it. But when the book series is meant to be a comedy and it is not funny, I will not roll with that.

James "Slippery Jim" diGriz started out in book one as a sarcastic bastard. He was a loose canon, fun, kind of like a nasty Han Solo at the beginning of Stars Wars. By the end of the series (this book is the last one, btw), Jim is now morally upright and utterly boring, like Solo in Return of the Jedi. Returns came out 12 years after the prior book and a whopping 50 years after the first. Was Harry Harrison rusty? Did he forget how to write diGriz? Or did he want to turn his anti-hero into a good guy and leave us with a warm fuzzy for the fella? Whatever the case, he didn't come with a good game plan for this changed character.

In general, Harrison's writing has eroded. There's lot of mundane dialogue. It's not funny or even necessary. The sentences themselves just feel mechanical. Things happen, it looks like it might be rough going, but time and time again the hero fixes it and we're off on our merry way. No tension. No excitement. No reason to care.

Maybe this deserves a half star more than I gave it, but I'm not in a generous mood. Harrison fucked me on this one and he's getting nothing more from me. Nothing! I'm not even shelving this under my "humor" or "comedy" categories. There's no reason to.