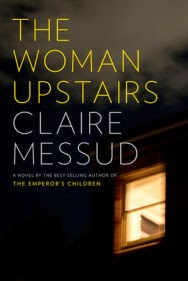 The Woman Upstairs by Claire Messud
2013
Reviewed by Diane K.M.
My rating: 4 out of 5 stars

Either way, this novel was so powerful and jarring that it jumbled my thoughts and disrupted my sleep. The book has been on my radar for more than a year, but I had put it off because I had mistakenly thought it was focused on the relationships between Muslims and Americans, which would have been fine, but that theme has been used a lot since the Sept. 11 attacks. (There is some of that in the book, but it is a minor plot point.)

Instead, the story is focused on the anger and anxiety — hell, let's just call it a mid-life crisis — of Nora Eldridge, a single woman who teaches elementary school in Cambridge, Massachusetts, and who wishes she had more time to be an artist. One day, she meets a boy named Reza, and she becomes so attached to him and his parents that she feels like she's falling in love with the family. Sirena, the boy's mother, is also an artist, and the two women share an art studio for the year. Skandar, the boy's father, is a visiting scholar at Harvard, and Nora enjoys long discussions with him. Reza is a charming little boy, and Nora enjoys babysitting him when his parents are busy.

When we meet Nora, she admits she is very angry, but we don't really know what she is upset about. At first I thought it was at being single, at being undervalued as a woman in a patriarchal society, at being forced to be a school teacher when she really wanted to create art, etc. It is some of that, but I didn't fully understand the reasons for her anger until the end of the book, which brought a surprising and enlightening conclusion to the story.

I could relate to Nora's dreams and fears and anxieties and anger, and I saw shades of women I know in her. She was veryreal, very well-drawn. Nora calls herself the Woman Upstairs because she feels invisible, she feels like a good girl who is overlooked and taken for granted. Nora felt more connected to the world when she was sharing part of her life with Sirena and Reza and Skandar. Early on, we sense the relationship was temporary because she called it "the year with Sirena," so at some point, she is abandoned and alone again.

My only criticisms of the book were the references to real-world events. Most of the story takes place in 2004, and I found those newsy intrusions annoying. Also, Reza was described as so cherubic and sweet that it was unbelievable. In the book, the women were more realized characters than the men and boys, and I never really understood Skandar. But overall, this book is well-written and a compelling story, and I would highly recommend it.

"I always understood that the great dilemma of my mother's life had been to glimpse freedom too late, at too high a price. She was of the generation for which the rules changed halfway, born into a world of pressed linens and three-course dinners and hairsprayed updos, in which women were educated and then deployed for domestic purposes — rather like using an elaborately embroidered tablecloth on which to serve messy children their breakfast."

"I always thought I'd get farther. I'd like to blame the world for what I've failed to do, but the failure — the failure that sometimes washes over me as anger, makes me so angry I could spit — is all mine, in the end. What made my obstacles insurmountable, what consigned me to mediocrity, is me, just me. I thought for so long, forever, that I was strong enough — or I misunderstood what strength was. I thought I could get to greatness, to my greatness, by plugging on, cleaning up each mess as it came, the way you're taught to eat your greens before you have dessert. But it turns out that's a rule for girls and sissies, because the mountain of greens is of Everest proportions, and the bowl of ice cream at the far end of the table is melting a little more with each passing second. There will be ants on it soon. And then they'll come and clear it away altogether. The hubris of it, thinking I could be a decent human being and a valuable member of family and society, and still create! Absurd. How strong did I think I was?"

"When you're the Woman Upstairs, nobody thinks of you first. Nobody calls you before anyone else, or sends you the first postcard. Once your mother dies, nobody loves you best of all."

"You know those moments, at school or college, when suddenly the cosmos seems like one vast plan after all, patterned in such a way that the novel you're reading at bedtime connects to your astronomy lecture, connects to what you heard on NPR, connects to what your friend discusses in the cafeteria at lunch — and then briefly it's as if the lid has come off the world, as if the world were a dollhouse, and you can glimpse what it would be like to see it whole, from above — a vertiginous magnificence. And then the lid falls and you fall and the reign of the ordinary resumes."

"What does it mean that the first thing every American child knows about Germany is Hitler? What if the first thing you knew was something else? And maybe some people would say that now it's important, after the Second World War, it's ethical and vital that Hitler is the first thing a child knows. But someone else can argue the opposite. And what would it do, how would it change things, if nobody were allowed to know anything about Hitler, about the war, about any of it, until first they learned about Brahms, Beethoven and Bach, about Hegel and Lessing and Fichte, about Schopenhauer, about Rilke ... one of those things you had to know and appreciate because you learned about the Nazis."

"The Woman Upstairs is like that. We keep it together. You don't make a mess and you don't make mistakes and you don't call people weeping at four in the morning. You don't reveal secrets it would be unseemly for you to have. You turn forty and you laugh about it, and make jokes about needing martinis and how forty is the new thirty, and you don't say aloud and nobody else says aloud what all of you are thinking, which is 'Well, I guess she's never going to have kids now!'"
Posted by DianeLibrarian at 6:00 AM No comments:

Bay's End by Edward Lorn
My rating: 4 of 5 stars

When Trey and Eddie put cherry bombs in the back of the sheriff's car, they blast away the outer layer of the sleepy town of Bay's End and get a look at the sickening underbelly that lies beneath...

I've made no secret that I think Edward Lorn is the best example of self-publishing done right. Not only has he never stalked me to my house and hit me with a brick, he's also given me my money's worth on every occasion. When Bay's End became free on the kindle, it seemed like a slam dunk. It was.

Bay's End is a coming of age tale, akin to Stephen King's The Body or Robert McCammon's Boy's Life. When Eddy moves in across the street, Trey suddenly has a new best friend. Together, they unwittingly uncover a lot of nastiness that lurks beneath the surface of small town life.

Lorn wears his influences on his sleeve but that's not necessarily a bad thing. Bay's End reads like an early Stephen King tale, where the horror comes from ordinary people, not spider clowns that feed on fear. Ever get chased by a vicious dog or threatened by an adult when you were a kid? Scary stuff.

The characters are like people from the neighborhood I grew up in. Eddie's the smart mouth, Candy's the girl next door with dark secrets, and Trey is the everyman the audience can relate to, though I have to think there's more than a little Edward Lorn in Trey.

Bay's End is a pretty brutal book. Nothing that comes to light is pretty. It's a short novel but at the same time, it's the perfect length. If you're looking for a scary trip to nostalgiaville, let Edward Lorn be your driver. Four out of five stars.

Wyatt by Garry Disher
My rating: 3 of 5 stars

When an old accomplice named Eddie Oberlin offers Wyatt piece of a job, he's hesitant but needs the money. As these things usually go, there is a double cross and Wyatt and Eddie's ex-wife Lydia Stark are left for dead. Can Wyatt get his money and teach Eddie Oberlin what happens when someone double crosses Wyatt?

I first learned about Garry Disher's Wyatt series while spending hours pouring over The Violent World of Parker. When this one, the seventh book, popped up in one of my cheapo ebook emails, I snapped it up.

"Parker down under" is kind of a lazy way to describe Wyatt but that's pretty much the premise. Wyatt is an Australian version of Richard Stark's Parker, a planner who is relentless when it comes to getting what he wants. He has more of a heart than the criminal force of nature that is Parker but is still one tough cookie.

Wyatt, despite being the seventh book in the series, is a very accessible book. While the past was alluded to, I didn't feel as if I missed anything by not reading the previous six books. The caper is the tried and true snatch and grab, complete with an unforeseen double cross and some equally unforeseen bad information about the take.

I think Garry Disher did a good job of crafting an homage to Parker without making Wyatt seem like a complete ripoff. That being said, there were a ton of Easter eggs for Parker fans, like an apartment building called The Westlake Towers and Wyatt switching clothes with a drunk named Parker in the police station. Also, there was a police officer named Grofield. Another thing I really liked is that Disher didn't seem to be trying to ape Stark's style but still captured the overall flavor of the Parker books.

While I didn't find Wyatt overly original, it was a fun and engaging read. I'm giving it a three since I enjoyed it but someone who didn't have 20-something Richard Stark books to compare it to might rate it higher.