A Trip Back in Time with Derek Strange

In 2001, in Right as Rain, George Pelecanos introduced Derek Strange, an ex-cop turned private detective in Washington D.C., where virtually all of Pelecanos's books are set. Strange would ultimately appear in three other novels, and this book makes the fifth.

On a rainy afternoon in 2011, Strange, who is now on the wrong side of sixty, is sitting in a bar with his pal, Nick Stefanos. A song comes up on the jukebox, as songs are wont to do in a George Pelecanos novel, and it sets Strange to reminiscing about events in the summer of 1972, the summer of the Watergate burglary that would ultimately bring down the Nixon presidency.

Over a long afternoon and several drinks, Strange proceeds to tell Stefanos the story of Red "Fury" Jones. At the time, Strange was just off the police force, beginning his own agency, and so strapped for cash that he couldn't even afford a proper sign out front. A sexy young woman walks into his office and hires Strange to recover a ring that she claims to have inherited from her grandmother. It's just cheap costume jewelry, she says, but it has great sentimental value.

For some reason, the woman had given the ring to a friend who is also a drug addict so that he could have it appraised for her. The story sounds more than a little fishy, but then these stories always do, and Strange agrees to track down the ring.

Strange discovers that the addict to whom the woman had entrusted the ring has been murdered and the ring has gone missing. In pursuit of the missing ring, Strange reconnects with his old partner, Frank Vaughn, the detective in charge of investigating the addict's murder.

What follows is an entertaining tale as Vaughn pursues a multiple murderer while Strange attempt to recover the ring which turns out to be as elusive as the infamous black bird from The Maltese Falcon. The story includes a lot of colorful characters and contains all the trademark Pelecanos references to cars, "decks" of cigarettes, and about eight thousand different songs. There's a fair amount of sex and violence, and it's fun to watch the young Derek Strange in action again. This book will appeal to large numbers of crime fiction readers and fans of Pelecanos will not want to miss it.
Posted by James L. Thane at 9:29 AM No comments:

Have Claws, Will Travel

Reviewed by Kemper
3 out of 5 adamantium laced stars.

Logan a/k/a Wolverine (Hugh Jackman) is trying to recover from the events of X-Men: The Last Stand which is understandable because pretty much every one who saw that movie has tried very hard to forget about it.  His mutant healing powers have apparently made him immortal, but his long life has been pretty much nothing but sorrow and loss.  With nothing to live for,  Logan has retreated from the world and lives like a hermit in the woods until he’s found by a young Japanese woman on a mission. 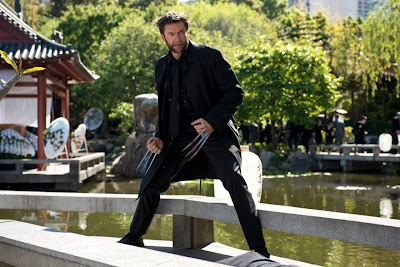 Yukio (Rila Fukushima) works for the wealthy and powerful business tycoon Yashida (Harhiko Yamanouchi) who was a Japanese officer during World War II.  Logan saved his life near at the end of the war, and the now elderly Yashida is dying.  Yukio convinces Logan to journey to Japan to say goodbye to the old man, but Yashida has an ulterior motive.  Logan soon finds himself wrapped up in a conspiracy that involves the Yakuza trying to kill Yashida’s granddaughter Mariko (Tao Okamoto).

This story will probably sound somewhat familiar to most Marvel fans, and that’s because after being the major character in four other X-Men related films (and one kick-ass cameo in another), Hollywood is trying to freshen up Wolverine by going back to the comic story that was his first big solo adventure.  While the movie doesn’t faithfully follow the 1983 Wolverine mini-series by Chris Claremont and Frank Miller, it does borrow heavily from it with Logan going to Japan and dealing with Mariko’s family and meeting Yukio.

As a movie, it’s a big improvement over the The Last Stand and X-Men Origins: Wolverine with Jackman delivering another solid performance as the mutant with a healing factor, unbreakable adamantium bones, razor sharp claws and a bad case of bed head.  The other movies have dealt on the angst of being Wolverine so it was refreshing that this one was about Logan trying to find a reason to live, and there’s some of the best character moments that we’ve seen on-screen for him yet. Director James Mangold uses the Japanese setting to give the film a different look and style than we’ve gotten in any of the other X-movies.

Where it sags is in terms of the action.  While there are some good fight scenes, particularly one segment on top a high-speed bullet train, Wolverine can get a little dull as a hero since he heals from any injury instantly so the movies have tended to rely on him just taking a beating and then clawing his way to victory.  This screenplay tries to add some more drama by having part of the plot be about Logan’s healing ability being greatly diminished, but then the battles are still about a slightly more wounded Wolverine hacking and slashing people with his claws.

There’s also not much in the way of comic book spectacle, and the most epic and visually stunning moment comes in the first few minutes so the rest of the film seems smaller by comparison.  That makes sense to some extent since this is a more focused character story than any of the other Wolverine movies, but Iron Man 3 proved earlier this year that you can do a lot with a compelling lead and still have plenty of eye popping comic book style action.

Pacing is also an issue, and this suffers from a drawn out second act.  A convoluted plot involves a few too many characters including Mariko’s father, her politically powerful fiancée, her ex-boyfriend with a talent for archery, a blonde doctor who is obviously up to some kind of shenanigans and a guest X-Man popping in.

Jackman still seems engaged and committed to playing Logan well and not just cashing a paycheck so he deserves a lot of the credit for the parts that work in this. He’s got some good supporting players and a fresh character angle to work with, but The Wolverine doesn’t feel like a big comic book adventure movie.  It’s more like just another decent but ultimately forgettable story you could find in any of the many Marvel comics starring Wolverine.  It’s telling that the only part that really got me excited was a mid-credits extra scene that teases the upcoming X-Men movie.

Posted by Kemper at 8:07 AM No comments: