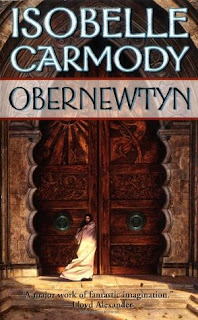 For Elspeth Gordie freedom is-like so much else after the Great White-a memory.

It was a time known as the Age of Chaos. In a final explosive flash everything was destroyed. The few who survived banded together and formed a Council for protection. But people like Elspeth-mysteriously born with powerful mental abilities-are feared by the Council and hunted down like animals...to be destroyed.

Her only hope for survival to is keep her power hidden. But is secrecy enough against the terrible power of the Council?

Despite its flaws, I really enjoyed Obernewtyn. Most of the characters were interesting enough; but not all were developed that well. The main character, Elspeth Gordie, seemed realistic enough; an emotionally distant child suffering the pain of losing her parents, spending her childhood in a variety of orphanages and possessing powers she has to keep secret. I also enjoyed her misfit friends, Matthew and Dameon, the enigmatic Rushton, and the mind-speaking animals. I wish some of the characters would have been developed more, like the doomed Cameo and the other girl, Selmar. The villains, Madame Vega, Alexi and Ariel were too one-dimensional to be interesting. Ariel was even funny at times, though I'm certain Carmody didn't mean for his character to be humorous.

I love post-apocalyptic fiction, and Carmody did a great job creating a society controlled by a fearful religious faction. I grew to care about the characters and the fate of the Misfits, but would have liked more background information on the world outside Obernewtyn. The magical abilities of the orphans were convincing and explained in great detail. At times, however, I felt the author overused Elspeth's magical abilities to conveniently get her out of jams and found it a little contrived at times.

While the story didn't seem overly original to me, the totalitarian society controlled by a religious faction fearful of the Misfits' mental abilities was interesting, as well as the variety of things one can do with her mind.

Obernewtyn was short, easy, and fun to read. It invaded my nightly dreams and allowed me to have fun fantasizing about what life might be like possessing such mind powers. Had this book been written when I was a child, I know it would have been very enjoyable.

The cover artwork by Donato is stunning, too.
Posted by Nancy at 12:53 PM No comments: