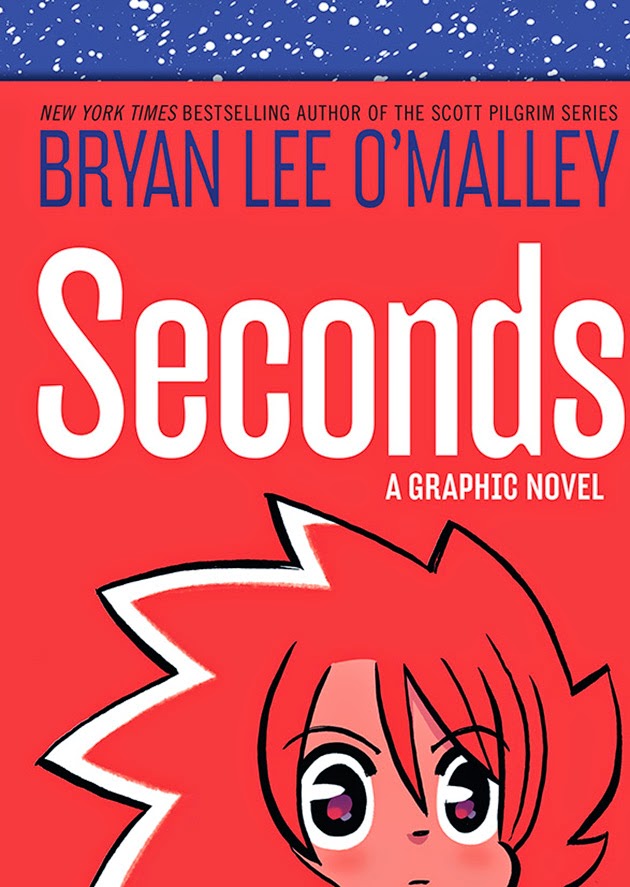 
This graphic novel is just cool.

It's the story of Katie, a chef who wants to open her own restaurant, and she also wishes she could get back with her ex-boyfriend, Max. Katie lives in an apartment above a restaurant named Seconds, and one night she meets Lis, the spirit of the house. Katie finds some mushrooms and a notebook in an old dresser, and by writing down a mistake and eating the mushroom, the past will be changed.

Katie quickly gets addicted trying to fix all of her mistakes, and each revision changes the universe. First she tries to prevent an accident in the kitchen that injured her friend, Hazel. Then she goes farther back in time and totally changes her relationship with Max, a decision that has serious consequences.

But Katie can't stop trying to change things and make her life "perfect." Each morning she wakes up, she isn't sure exactly how the world will be different, and her life has changed so dramatically that she doesn't remember whole parts of it anymore, because they never really happened.

And by constantly changing the universe, Katie has angered the house spirit, and she accidentally created a monster. In the end, after multiple lives and some scary situations, Katie finally stops fighting herself and accepts things as they are.

"Listen: This is what I've learned. There are things we can't change, and we just have to accept that. And maybe that's some kind of grace."

The book was written by Bryan Lee O'Malley, author of the popular Scott Pilgrim series, and I picked it up because I had also enjoyed that graphic novel. The artwork is beautiful and I really liked the story. It's a good reminder that even though we wish we could change our past, actually doing so would have unintended consequences. Maybe we should just accept our mistakes as part of life, and move on.
Posted by DianeLibrarian at 6:00 AM No comments:


On an ocean world where communities live on the backs of gargantuan sea turtles and survival is key, orphan farmer Tenjat finds his lands ruined and takes the test to become a Handler, one of the warriors that defends the Turtle. But with another Turtle heading in their direction, will the new crop of Handlers be ready to defend it in time?

I saw this on John Scalzi's The Big Idea and just had to read it. Villages on the backs of giant sea turtles? What's not to like?

The worldbuilding is both my favorite part of this book and the part that kept me from really enjoying it. Allow me to elaborate.

As I said above, I loved the idea of villages on the backs of sea turtles warring with each other and with the nagas, the creatures that harried the Turtles at every turn. I also thought the idea of Handlers and Tenders taking care of the rest of the islanders by protecting them was also very cool. The magic system was fairly unique.

Here's the part I didn't like: As with some other Young Adult books, I found some logical flaws in the worldbuilding. Just as I found the faction system in Divergent to be illogical and the fact that the other three houses allowed Slitheren to exist among them knowing what buttheads they are, I just didn't buy the culture of the Turtles.

Survival is key on the Turtles and people become Handlers, Tenders, or Artisans if they have the aptitude and pass the test. Everyone else becomes farmers and are the only caste that breeds and they are looked down upon because of it. Huh? If survival is key, wouldn't you want the people with the talent breeding? Where do the inhabitants of the Turtles think babies come from? Also, this takes place in the chaste world of YA so there is no thought given to casual sex. Even if people on an island looked down on getting married, I guarantee there would still be people giving in to their throbbing biological urges.

All that aside, I still enjoyed the story of Tenjat rising from his orphan roots to become a handler. The romance with Avi was predictable and seemed bolted on but wasn't nauseating so I gave it a pass. I found the world refreshingly original, despite my problems with it. The ending was satisfying, if a bit pat.

The good and the bad balance out and since I liked it more than I disliked it, I'm giving it a three. It had to work for it, though.

Dead Sea by Tim Curran
My rating: 4 of 5 stars

A freighter bound for South America gets enshrouded in a fog bank and emerges in another dimension, a graveyard of ships choked with carnivorous weeds, tentacled nasties of all shape and size, and a mysterious entity that wants them all dead. But will the survivors of the initial shipwreck manage to avoid killing one another long enough to escape horrors beyond human understanding?

Geek Alert: When I was a kid, I was way into cryptids, UFOs, and, of course, the mysteries of the sea. Since this book references both Bermuda Triangle and the Sargasso Sea, I was all over it.

Dead Sea is a paranoid survival horror story, very much a forerunner of Tim Curran's upcoming novella, Blackout. Two groups of survivors fight for their lives against horrible crustacean-fish things, squid- and jellyfish-like horrors, spidery things, and all sorts of other things that man was never meant to lay eyes upon.

Curran mines centuries of sea lore and spins something approaching gold with it. I'm not in a hurry to return to the ocean after reading this or even put my toe in any body of water that I can't see the bottom of. The characters gradually slide closer to the edge of sanity as they encounter centuries old ships and the squamous horrors of a world with two moons and time that flows differently than ours.

The characters do a lot to keep the story going forward. When the horror doesn't come from the environment, it comes from the disintegrating sanity of the shipmates and from Saks, the biggest asshole this side of Galactus's. Seriously, I could not wait for the rest of the survivors punch his ticket.

The ending was pretty satisfying. In a tale like this, you don't expect happily ever after, just a handful of characters better off than the rest. That's pretty much what we got.

In many ways, this book feels like a trial run for Blackout. For me, Blackout is Dead Sea 2.0, a condensed and refined version of the original. If Dead Sea is beer, Blackout is fine bourbon. Since I can't really fault Curran's earlier work being as spectacular as his most recent stuff, I'm still giving this a four, even though it had to work for it.