More on Goodreads and behavior

Posted on September 27, 2013 by thebookgator
Book community Goodreads was bought by Amazon earlier this year, part of the impetus for my blog development. Nothing against Amazon as a retailer–I use their services and have a Kindle–but they have strict language restrictions for reviews, even if you are quoting from the text. I think I  contributed about four reviews there before I decided their process was too cumbersome and unsatisfying, partly because of the lack of community connection. What makes GR unique is the connection to groups of other readers–it is easy to get to know a particular reviewer, their reading habits and tastes. In addition, Amazon’s indie book reviews are sock-puppet heavy, so I rarely rely on Amazon as a site of information. Incidentally, I also find their graphics visually displeasing. At any rate, the purchase was inevitable, if only to establish Amazon as primary retailer for books and the general collection of market data.

I understand the reasoning, but part of the charm of GR is a very engaged, literate community that largely says whatever it wants, within reason, in their reviews about books and authors. GR has long had a “secret sauce” recipe for promoting certain reviews, but there is an independent ‘like’ system that operates as well. Goodreads recently set its community on edge with a new policy against discussing author behavior in reviews and the unwarned deletion of user reviews and shelving, in an effort that is widely viewed an attempt to promote product and censor reviewers in favor of authors.  The fact that reviews referring specifically to an author’s behavior in a negative manner were removed, and reviews discussing positive behavior remain only fuels the suspicion that the connection is about negative reviews and sales, not about a true review ideology.  Regardless of their stated or unstated meaning, the idea that behavior does not impact product is the ultimate in capitalist reasoning, and I can’t ethically keep my concerns quiet.

In the sci-fi and fantasy convention community, for instance, there has been a lot of recent publicity about big-name authors sexually harassing women at cons, and having it condoned because, you know, they were big name authors. A number of authors and convention attendees protested. Author John Scalzi even came up with a statement regarding invitations to cons that do not have anti-harassment policies in place and enforced, and a number of authors co-signed. Perhaps not coincidentally, there’s also been recent debate in the Sci-Fi and Fantasy Writers of America about general sexist behavior/statements of some prominent members, ultimately leading to the ouster of people that could not agree to modulate their statements and/or behavior.

Yes, I see the irony.

The flip side is that some authors’ positive behavior also inspires attention and reviews. There’s a couple of authors that I’ve read and, quite honestly, have been only moderately impressed by their books, but I continue to follow them on blogs and promote them because they are good people. You know, struggling to be an ethical human. To make a difference. Using their platform to lead. Although only in moderate like with their books, I keep trying their books because I like them, as people, not just as creators. Clearly, behavior can have a positive influence on reviewing and book sales as well.

The fact remains, behavior is a part of who we are and how others around us judge us. Remember the saying “actions speak louder than words?” One may argue that creations should stand on their own. Perhaps. But I follow the modernist school of thought that believes contextualizing the work adds layers of meaning. You can’t separate behavior from ‘product,’ and I would think of all people, artists would be the foremost in arguing against this artificial division. As Goodreads works to moderate the reviewers and authors who are behaving badly, they need to be cognizant that behavior does not remain separate from the product. To ask that reviewers focus on the books and ignore actions, for better or for worse, is unacceptable.

If this was a mere thought schism, say the idea that behavior, good or bad, should not impact product, that would be one thing. But that they specifically allow the positive and not the negative smacks of the corporate influence eyeballing sales. Right, it is their site.  We understand that. But they’ve also essentially started to shift their mission to something more profit-focused at the expense of the community that got them there.
Posted by carol at 9:30 AM No comments: 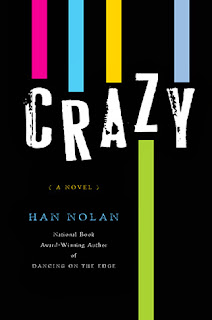 Fifteen-year-old Jason has fallen upon bad times—his mother has died and his father has succumbed to mental illness. As he tries to hold his crazy father and their crumbling home together, Jason relies on a host of imaginary friends for guidance as he stumbles along trying not to draw attention to his father’s deteriorating condition.

Oh, this book. Is there a word for a book that breaks your heart into tiny, tiny pieces? My favorite book in all the world is a book like that. So is this one. And it did it in an entirely believable way.

So let's count the ways Han Nolan stomped on my heart. There's the main character, Jason. His mother has passed away, leaving him to take care of his father, who is seriously mentally ill, and getting worse. They're drowning under the medical bills left behind when Jason's mother died. And Jason is dedicated to keeping himself invisible, unnoticed. Because if he is noticed, his father will be, too, and they'll take him away. Again. Not enough? Jason finds himself slotted into a support group at his school, for teens going through a rough time. There's Pete, and his drug-addicted father. There's Haze, whose parents are going through a very nasty divorce. Nasty enough that his father will write "whore" in huge letters all over the family house, and never consider how that will affect his twelve-year old daughter. And then there's Shelby. Shelby's mother is dying, rapidly. She has ALS, but the specifics of her illness matter much less than the fact that Shelby is losing her mother in pieces.

I felt for all of them, because they're decent and believably flawed and care about each other. Jason will probably be the character that most people connect to most strongly. He is the main character, even the viewpoint character. It seems like he just can't catch a break, and that things are getting worse and worse for him and for his father. And his one overriding, even overwhelming, motivation throughout the entire book is to take care of his father. But for me, I felt most connected to Shelby, for personal reasons. When she talks about how much she loves her mother, how lost she'll feel when she's gone, how she already misses her, but that sometimes she wishes it were all over already, for her mother's sake because she's suffering, but also for her own sake... I understand. I understand because I felt exactly the same way when I was eighteen and nineteen and losing my dad. For those of us who have been there, or are there, Shelby might well end up as the star.

All of the above doesn't mean that this is 300+ pages of downer. There's some humor, and more hope. As rough as things are with their families, Jason, Pete, Haze, and Shelby all still care about them, and about each other. There are no easy answers, no simple solutions. At the end of the book, everybody's circumstances have changed, probably for the better, but their problems aren't over, and Nolan never pretends that they are. But maybe they'll be able to handle them better. It isn't exactly a happily ever after, which is good. A neat, sunny ending wouldn't be fair to the rest of the book.

So yes, this book did hurt me. But it did it honestly, by telling a realistically tough story about characters that were very likeable, very easy to care about. That's a good thing, but I'm going to need something much lighter to follow it up.
Posted by Sesana at 2:00 AM No comments: