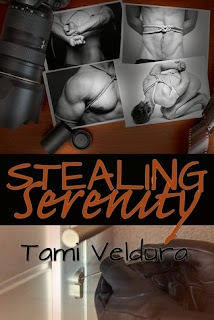 “Serenity,” a photograph worth four million dollars, was sold at auction to an anonymous bidder. Stealing it will represent the largest payday Daniel will have ever had. To make that happen, he poses as a photography curator to attract the attention of Kearin, the auction house owner.

Kearin takes Daniel under his wing to work in the non-profit branch of his business, but it’s a cover for his desire to see Daniel naked, bound, and needy for the camera. Kearin has a client interested in a very specific portfolio—filling the request would put him at the top of his field.

Daniel thinks he can use the modeling to get closer to “Serenity.” What he doesn't expect is to fall for Kearin's brand of intensity instead. So does he go for the photograph or Kearin's heart? He wouldn't call himself a master thief if he couldn't steal both.


Daniel Hogan is a thief with big plans to steal a $4.3M dollar photograph titled Serenity, so he insinuates himself into the good graces of Kearin Gerard, owner of Gerard Photography, the company who organized the sale to an anonymous bidder.

What Daniel didn’t anticipate was the intense attraction he felt for Kearin. His strong personality and personal photo collection piqued Daniel’s interest even further. He has no intention of letting his desires get in the way of obtaining information about the person who possesses Serenity, and takes every opportunity he can to look for clues. In the process, he learns more about Kearin, whose computer he now has access to. Kearin’s photographs of bound young men and the peaceful expressions on their faces captivate Daniel. He is surprised when he learns Kearin is looking for a model and doesn’t hesitate to accept.

This story takes place a little over a two-week period and is told from Daniel’s perspective. Each fragment has a date, time, and location, but the story is told in linear fashion. The tension builds up, as Daniel gets closer to learning about the anonymous bidder and getting his hands on the photograph. Meanwhile, the sexual tension between Kearin and Daniel becomes intense as Daniel submits to the restraints while being photographed.

There is no romance or sex here, just desire, slow-burning eroticism and elegant descriptions of Shibari. Kearin is an ambitious man who is looking to enhance his career and Daniel badly wants that photograph. While I enjoyed the details of Daniel’s bold art heist, it was Kearin’s elaborate knotwork and Daniel’s submission in front of the camera that captured my interest.

This was a very well-written and cleanly edited story with two well-developed main characters and a small cast of secondary characters. The conclusion was clever and open-ended, but I was a little dissatisfied at how some details were addressed, like what was so special about this photograph?

“Daniel felt his eyes focus on the far wall of the studio as Kearin ducked low, and he saw it. Serenity. Stripes of blue and green. A photograph framed subtly on the wall, so nondescript in performance that it could easily be glanced over. Just another design photo. Just another print."


Really? This was worth $4.3 million dollars? Since such a large part of the story was focused on the art heist, I need a much better description than that!