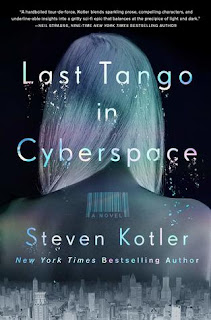 Steven Kotler channels his best William Gibson, in the new sci-fi thriller “Last Tango in Cyberspace”, which plot centers on corporate greed, drugs and eco-terrorism. Unfortunately, Kotler does not completely pull it off.   One problem is the meandering plot.  Marketed as a thriller, one could wish for more action.  Instead, Kotler overindulges in a veritable smorgasbord of near future predictions. From a deep dive into marijuana variants that only Seth Rogan could understand to bar code branded people to vegan people who are eating grown cultured beef, the novel is full of ideas about the future.  And some are interesting. There is a deep dive into animal rights and why people should be more protective.  But Kotler tries too hard to fit some of them in.  And Kotler also seems to have a fascination with “Dune”, the Frank Herbert, magnum opus, which will play a significant role in the story.  Even the title is cited several times in the text, as if the author is trying to convince the reader that the novel is about cyberspace, when in reality it’s mostly about drugs and the cyberspace connection is merely a loose tie-in.

Judah “Lion” Zorn is an “empathy tracker”, who is able to discern emerging trends in society. Sir Richard, who runs Artic Pharmaceuticals has hired him to track down the leader of a cult, who may have information about a new drug about to hit the market. The drug helps with autism, so Artic’s motives may be good.  The problem is that the new drug increases the empathy that people feel for others, including animals. So a noted hunter, who may have taken the drug, is found dead, his head mounted like the other prey he killed on the wall of his trophy room.  And there may be cross interests at work. Jenka, who works for Arctic is in charge of “special creatives” is involved. His assistant Penelope, is also a player, who will become more important to Zorn as the story progresses. The Cult leader will be met on the way but missed but then found again.  Arctic Pharmaceuticals motives will, in the best cyberpunk tradition, to be grey at best.

I found the novel to be a slow slog. It does pick up in the second half, but there is still too much meandering around. There are many sharp science fiction speculative ideas in the story, but digging out the nuggets is not worth the time to discover them. Kotler can hold your interest, but there is better fare out there.

Posted by Jeffrey Wendler at 1:30 PM No comments: