Thy Bros Well Before Thy Hoes

Academic squabbling and gauntlet-tossing over content and form aside, The Two Gentlemen of Verona stands as one of the earliest recorded attempts at the comedic form we have from the Shake. We see here many of the themes and plot devices that will surface again and again throughout the man’s body of comedic work, such as women disguising themselves as male pages, rings symbolizing fealty, bros rivaling over who has first dibs on the hottest of the hoes, lamebrain suitors, servants whose speech are littered with malapropisms (yet more often than not they’re the only ones spouting out anything closely-resembling wisdom), social structures being flung out the window once you leave the comfort of the castle and go out into the wilds of Italy’s forests, and a nice and neat ending with the necessary bombardment of marriages. This play is certainly clumsy and ridiculously implausible in places, but still it ends up being a satisfying and fun bit of witty merriment for any self-proclaimed lover of the Shake. Loved the Outlaws of Love who pop up in the last two acts to help facilitate the pulling of heads out of respective asses, and also Launce’s touching and funny soliloquy about his dog, Crab, which oddly enough is the closest thing to a genuine display of love and devotion found anywhere in this play about bratty and over-privileged rich kids and their feelings.
Posted by Unknown at 7:03 PM No comments:

Even in the Galactic Demimonde Manners Matter 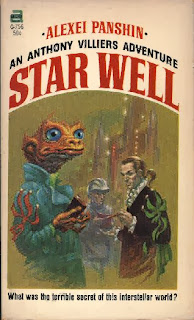 _Star Well_ by Alexei Panshin is an entertaining comedy of manners in the SF mode with a hint of the demimonde thrown in for flavour. Our protagonist is Anthony Villiers, Viscount Charteris, an aristocrat and fop whose life seems to be a perpetual Grand Tour of the Nashuite Empire, chasing the stipend afforded him by his father from port to port and resorting to what might, in impolite circles, be considered illicit means to gain funds when he is unable to catch up with it. He is no career criminal or grifter, though, and is content rather to live a life of comfort and fashion without sullying his hands with anything so low as labour or outright criminality. He is, in a word, a gentleman.

His travelling companion is the enigmatic Torve the Trog, a giant befurred frog who seems equal parts Yoda and Chewbacca. Torve is generally a rather stoic companion, at least in this volume, and is content merely to evade customs officials anxious to restrict Trog travel, sit cross-legged in the Palatine Suite composing indecipherable poetry seemingly based upon the single word “Thurb”, and utter gnomic phrases repudiating causality to Anthony whenever confronted by the latter’s concerns or problems:  “No, you have very strange mind. I do not understand. But is no mattering: favourable line of occurrence and friendship travel together. I like you – means nothing to me.” He is rather a charming fellow.

Star Well is a space port tunnelled into an asteroid which resides in the Flammarion Drift, an empty reach of space “where the stars don’t grow” and which is known primarily for some gambling, a little shopping, and an otherwise complete lack of interest. It is thus generally used as little more than a stopover by travellers on their way to somewhere else. This suits its owners and operators fine, since it is, of course, also the home of illegal smuggling and other illicit activities. We follow Anthony as he becomes embroiled in these activities, quite by accident of course, and meets such varied characters as Godwin the deadly enforcer of low birth and aristocratic yearnings (a man who, if it can be believed, has an even more accomplished toilet than that of Villiers…though of course it is somewhat vulgar in its ostentation); Godwin’s boss the cow-towing Hisan Bashir Shirabi who might make a formidable criminal if only he could overcome his awe of his betters; a corpulent and red robed priest of Mithras who may be more than he appears; and the charming and capable Louisa Parini, a fifteen year old girl of shadowy parentage en route to a finishing school for girls which she would most heartily like to avoid.

There is another character even more prevalent in the tale, the narrator, whose asides and commentary make up most of the ‘mannerism’ of the tale. I generally don’t mind an intrusive narrator like this (in fact I quite love it when done with panache, as in Dumas), and usually such a tale demands one, but I think Panshin needed a slightly lighter touch with him than was on display here. Some of the bon mots were a little too strained and it would have been nice to see a few more in the mouth of Villiers himself, though he does get a few of his own.

All in all this was an enjoyable tale and if you like the comedy of manners mode and light sci-fi then you will likely enjoy this. Despite its slight beginnings the story ends in a satisfactory manner and leaves open some room for the development of Villiers and his adventures to something more substantial. Two volumes follow (a fourth, concluding volume, was never produced due to disputes between Panshin and his publishers).