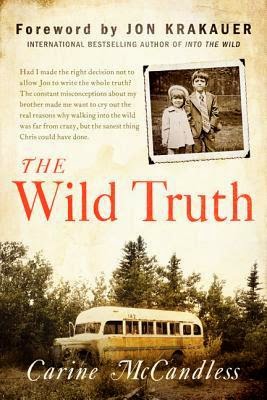 
Reading this book was like pulling over on the Interstate to gawk at a 20-car pileup. You know you shouldn't be staring at the mess, but you can't look away.

Carine McCandless is the younger sister of Chris McCandless, who became famous after his story was published in Jon Krakauer's book Into the Wild (which was also made into a movie, directed by Sean Penn). This summary is from Krakauer's Author's Note:

"In April 1992, a young man from a well-to-do East Coast family hitchhiked to Alaska and walked alone into the wilderness north of Mt. Mckinley. Four months later his decomposed body was found by a party of moose hunters ... His name turned out to be Christopher Johnson McCandless. He'd grown up, I learned, in an affluent suburb of Washington, D.C., where he'd excelled academically and had been an elite athlete. Immediately after graduating, with honors, from Emory University in the summer of 1990, McCandless dropped out of sight. He changed his name, gave the entire balance of a $24,000 savings account to charity, abandoned his car and most of his possessions, burned all the cash in his wallet. And then he invented a new life for himself, taking up residence at the ragged margin of our society, wandering across North America in search of raw, transcendent experience. His family had no idea where he was or what had become of him until his remains turned up in Alaska."

I have read Into the Wild many times and loved it. I had a strong, personal reaction to McCandless' story because he reminded me of a loved one. When I heard that Christopher's sister had written a book about him and their family, I knew I had to read it. While I am glad I did, the story now bothers even more.

Carine said she wanted to write this memoir to show why Christopher chose to leave his family. "I wanted to explain that going into the wild was far from crazy; it was the sanest thing he could have done."

Her book does give some context to Chris' actions. The simplest explanation is that their parents, Walt and Billie, fought a lot, yelled a lot, and things often turned violent. When they were younger, Chris tried to protect Carine from the abuse, and he once told a friend he felt guilty for abandoning her when he left for college.

A more complicated explanation is that in addition to the domestic abuse, Walt had another family. He had six children with his first wife, Marcia, and was still married to her when Chris was born. Walt split his time between the two homes, and he constructed elaborate excuses for his extended absences and the other children. (Walt's "fiery temper" and the marriage overlap are briefly mentioned in Krakauer's book, but Carine's memoir is much more explicit.)

It wasn't until Chris and Carine were much older that they learned the truth about Walt's first wife and their six half-siblings. Carine wrote that Walt's duplicity greatly upset Chris, and he fumed for years about it.

"I believe Chris went into the wilderness in search of what was lacking in his childhood: peace, purity, honesty. And he understood there was nowhere better for him to find that than in nature."

I was fascinated by Carine's story, but also repelled by it. I liked learning more about Chris' life, but she spends a lot of time discussing her boyfriends and her failed marriages and her materialistic needs. It doesn't take a psych degree to see that Carine made the same mistakes as her mother, and some of those choices upset Chris. I would not recommend this book unless you really want to learn more about Christopher McCandless, or if you want to delve into a seriously dysfunctional family.

P.S. One good thing that came out of reading this memoir is it prompted me to reread Into the Wild. Man, I love that book.
Posted by DianeLibrarian at 6:00 AM No comments:

The Immortal Life of Henrietta Lacks

The Immortal Life of Henrietta Lacks by Rebecca Skloot
My rating: 4 of 5 stars

When a poor black woman dies of cervical cancer in 1951, her cancerous cells live on. But what happens when her biological material generates billions of dollars for the drug and pharmaceutical industry, leaving her dirt poor descendants in the lurch?

Yeah, I know I wrote that like the teaser for one of my mysteries but the only mystery here is how people who have profited from the diseased cells that killed a woman can sleep at night while her kids and grand kids don't have two nickels to rub together.

Henrietta Lacks married her counsin, contracted multiple STD's due to his philandering ways, and died of misdiagnosed cervical cancer by the time she was 30. However, the cancer that killed her survives today in the form of HeLa cells, which have been taken to the moon, exposed to every manner of radiation and illness, and all sorts of other experiments.

While other people are raking in money due to the HeLa research, the surviving Lacks family doesn't have a pot to piss in or a window to throw it out of, bringing me to the real meat of the book: The pharmaceutical industry is a bunch of dickbags. Imagine having something removed that generated billions of dollars of revenue for people you've never met and still needing to watch your budget so you can pay your mortage. Fair? Shit no, but that's the way it is, apparently. It also seems illogical that you can patent things you didn't create but again, that's the way the cookie crumbles.

The Immortal Life of Henrietta Lacks is an eye-opening look at someone most of us have never heard of but probably owe some sort of debt to. Also, it drags the big money pharma companies out in the sun. Sadly, they do not burst into flames like the vampires they are. Four out of five stars. I'm going to go read something happy now.