A FRIEND OF MR. LINCOLN BY STEPHEN HARRIGAN

A Friend of Mr. Lincoln by Stephen Harrigan
My rating: 4 of 5 stars

”Why did he not drink? Surely no sense of refinement or decorum prevented it, since he was neither refined nor decorous and kept in his head an extensive archive of the filthiest stories and jests human beings had ever uttered. For all of Lincoln’s instinct for hearty comradeship, his was a private mind. He was a tightly held, unrevealing man, and perhaps he was afraid of what spirituous liquors might reveal of himself, afraid of the places within himself they might lead him.” 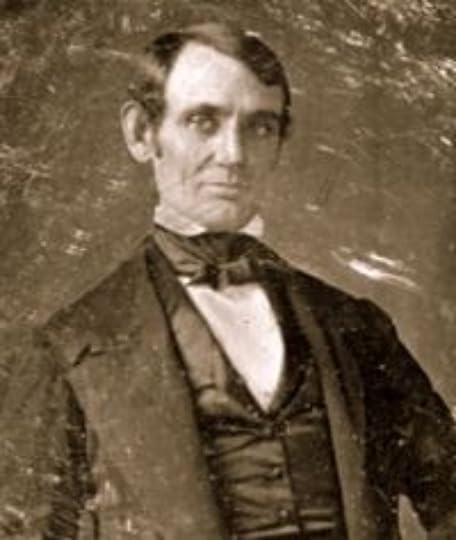 A young Abraham Lincoln from about 1847.

The melancholy that afflicted Abraham Lincoln his whole life is well documented. There were times in his life when dark depressions were so debilitating that he even considered taking his own life to end his torment. He suffered from hopelessness and soul crushing guilt. He thrusted a salt crusted thumb into the raw wounds of every failure he’d ever experienced.

The rest of the time he was a studious, but fun loving, lecherous storytelling, and ambitious young man. People may have felt they knew Lincoln, but I think, the more I read about him the more the real Lincoln, the man locked up in that large, melon head was someone he never felt comfortable revealing. I think he was exceptionally bright and ruled by dark passions. He was afraid of himself, afraid of what he might do if he ever let loose the shackles around his true self (axe-wielding vampire hunter, maybe?). The world wasn’t ready for his true self. They were barely ready for the persona he chose to show the world.

Cage Weatherby, a struggling poet, was one of Lincoln’s best friends in Springfield. They both arrived prepared to take advantage of a burgeoning city. Cage had made investments and tried to stay away from the rampant speculation that was suddenly sweeping the city up in tattered blankets of greed. I certainly identified with the trials and tribulations of a businessman. ”He was holding on to four town lots, thinking the ripest time to sell them would be when the statehouse was finished and the assembly was at last settled in Springfield, and he had two farm properties to manage, in addition to the Palatine and Ellie’s shop. All of these matters---rent income, repairs, tenancy arrangements, town taxes, salaries, procurements---were increasingly complicated and vexing, with money always never quite where it needed to be.”

All these financial worries were also a constant distraction from his true calling... to write poetry. He wanted more than just a roof over his head. He wanted stability, a security that would keep the fear of penury away from his golden years. He was also in love with a woman who refused to be trapped in a relationship. Her husband absconded to parts unknown with her fervent hopes of his untimely demise chasing closely behind him. She decided, with her husband’s departure, that she would never let a man make decisions for her again. Cage loved her progressiveness, but still couldn’t help feeling those very natural feelings of wanting to possess her. He wanted to help her open a dress shop, but desired to take something from her that she was determined to hang onto. Her freedom.

”’In that case I assume you’d want to break your arrangement with Speed.’

‘And at the moment,’ she said, slowly unbuttoning her dress,‘that happens to be you.’”

Weatherby might have been friends with Lincoln, but there were important issues that they disagreed on. Like when Lincoln wrote a scathing article about a political opponent that nearly got him killed in a duel. The problem that Weatherby had with the articles was that Lincoln hid, very ineffectively, behind a pseudonym. ”It is my philosophy. Put your name to what you write, or don’t write it at all.”

I don’t know what percentage of people on GR have their account under a pseudonym, but I do know that most of the time when someone parachutes in on a review thread and leaves a nasty, abusive, or rude comment, they are not using their real name. Would they have made those same comments if their name was attached to the words? Maybe, but probably not. I know that most people do not abuse the use of anonymity in social media, but I for one have never posted a single thing online that did not have my real name attached to it. In that regard, Weatherby and I are in perfect agreement.

Another major issue he has with Lincoln is in regard to a social butterfly from Kentucky named Mary Todd.

”She stood in the sunlit center of the room in her pale yellow dress, clasping her hands in front of her waist, her elbows bent to show off her slender arms to best effect. It was a fetching pose, a portrait of thoughtful female gravity. Her face was perfect, in its way: a little round, a little soft, a mouth that was straight but not stern, eyes that were clear and frank. But there was no serenity in that face---there never had been, probably. She was a woman who could strike a pose of physical stillness but could not conceal the fact that her spirit was always plotting, wanting, needing more. Just like the men she had surrounded herself with---Lincoln, Douglas, Ned Baker, Ash Merritt, Cage himself---she had a governing appetite, a need to identify opportunities and then to seized them before they were gone.” 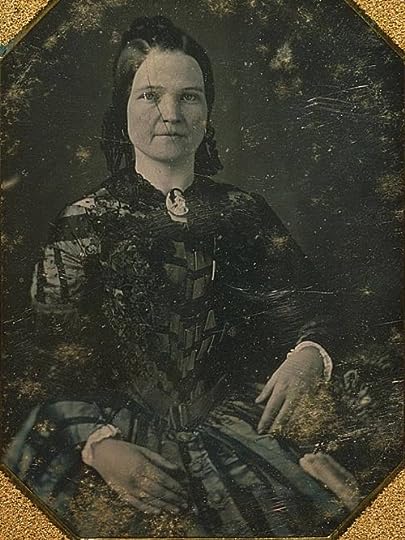 Mary Todd with Lincoln just added to her name.

Her naked ambition. Her feral intelligence. Her own battles with depression. All these traits had most men, despite her family money, looking for a wife who would be more compliant, happier, and more easily contented. She sifted all these men through her tiny fingers and decided that there was only one man who could hold up under the strain of her own expectations for him. His willowy frame would bend, but not break. She could make this man president.

I’ve never warmed to Mary Todd. I understand the demons that beset her. She paid a heavy price for her relationship with Lincoln, not only in the daily stresses and strains, but also in the losses they both suffered with the deaths of their sons. I often think that Lincoln needed a woman with smaller expectations for him, but then he would have probably never been president. Like many things, when I start thinking about changing the course of history, rarely does it work the way I want it to. In an odd way, the people unshackled from slavery should probably thank Mary Todd Lincoln for their freedom. Not because she wanted them free, but because she put the steel in the spine of the right man, at the right time, who was willing to do whatever it took to end the scourge of slavery in the United States.

Interestingly enough, when Lincoln was younger, he did not feel this way. Not that he was for slavery, but he was not an abolitionist. Weatherby several times purchased the freedoms of escaped slaves and found work for them. He was often befuddled by the noncommittal attitude of Lincoln towards what he felt was the largest issue of the time.

But then Lincoln was a political animal, and one thing he knew was having a strong stance one way or the other on the issue of slavery would only cost him votes. It was a hot potato, and though his hands were calloused from rail splitting in his youth, he was not willing to hold onto that potato. That said, when it counted most, he not only held the potato, but ate it.

Stephen Harrigan presents a very real portrait of a young Lincoln. A man not yet formed into the man who would eventually be the driving force behind, without a doubt, the largest shift in American policy in the history of the nation. We see him at his best. We see him at his most vulnerable. We wince when he isn’t the progressive we so expect him to be. We feel uncomfortable with his greedy ambition for power. He was so afraid of being nobody that he was determined to bend the will of the universe to escape that fate. Like most people who leave their mark on history, Lincoln was a complicated man, but a man that, when push came to shove, was able to take the arc of history on his shoulders and move it in the right direction.

Posted by JEFFREYKEETEN at 2:24 PM No comments: