Murder and Mayhem in the Dead of Winter 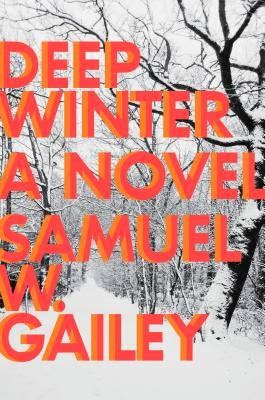 This is an atmospheric novel set in the middle of winter in a tiny town in eastern Pennsylvania named Wyalusing. At the center of the story is Danny Bedford, a giant of a man who was left severely challenged mentally in an accident in which both of his parents died while Danny was still a young boy.

Since that time, Danny's life has been a stern trial. He was raised by a bitter hard-drinking uncle and after the death of the uncle supports himself by tending to a laundromat. He lives in a tiny room above the laundromat which is part of his compensation. Most other residents in the small community either ignore Danny or mock him both because of his size and his disability.

The only person who's ever been kind to Danny is a waitress named Mindy who shares his birthday and who is angered by the way the rest of the town treats him. But when Mindy turns up murdered, Danny suddenly finds himself in the crosshairs of a number of people who immediately jump to the conclusion that he has killed her.

In particular, Danny is pursued by a vicious deputy sheriff who has bullied Danny all their lives and who is now ready to shoot him on sight. Danny is only vaguely aware of what is going on around him and his chances of surviving the night of the murder seem small indeed.

As the title implies, the story takes place in the dead of winter, and Gailey is at his best in setting the frigid scene in which the action takes place. The characters are well-drawn, if a bit one-dimensional, and one feels a great deal of sympathy for Danny and the tragic situation in which he finds himself. But the story did not resonate with me quite as much as I had hoped, in part because some of the characters did not seem all that believable.

This is another of those novels in which some of the characters drink very heavily in addition to taking drugs. As a result, any normal person would be totally incapacitated very early on, although these characters continue to forge on for hours, committing mayhem on a massive scale. This ultimately took me out of the story because I kept thinking that at least one or two of these characters should have been not just dead drunk, but simply dead from alcohol poisoning long before the climax of the novel.

There's another development at the end of the book which allows the narrative to spin out for another few chapters but that simply made no sense to me, and so while I enjoyed parts of this book, it winds up being three stars for me rather than four.
Posted by James L. Thane at 9:29 AM No comments:

Sameness Is Setting In For Snicket

The Wide Window by Lemony Snicket
Reviewed by Jason Koivu
My rating: 3 of 5 stars

Those super unfortunate orphans get stuck with another ineffectual guardian, who can't keep them safe from the dastardly Count Olaf. Looks like they'll have to find their own way out of this tight bind all by themselves, again!

The The Wide Window has some colorful characters, wonderful settings and enough action to keep this one entertaining through out. The overly apt naming of people and places gives this a very old-school storybook feel. Snicket keeps up with the whole defining big words thing, which some kids probably get annoyed with, even if they do learn a new word or two.

However, the problem is that at only the third in this series of 13 books, the repetitious plot line is beginning to wear thin. I doubt I would've read even this far in Lemony Snicket's A Series of Unfortunate Events if it weren't that the man behind that preposterous pseudonym, Daniel Handler, played accordion on my favorite band, The Magnetic Fields fantastic triple cd album 69 Love Songs. I know, it's a stretch, but I loved everything about them at the time and couldn't help myself. Here's a somber song he played on, if you care to listen: https://www.youtube.com/watch?v=ReTxR...

Wicked: The Life and Times of the Wicked Witch of the West by Gregory Maguire
Reviewed by Jason Koivu
My rating: 4 of 5 stars

Busting out my born-and-raised Bostonian accent, let me just say, this is Wicked awesome!

Without taking itself too seriously, Gregory Maguire's Wicked takes Frank L. Baum's original work quite seriously, using reverential satire, witty wordplay and just plain silliness to tell a fan's version of the Wicked Witch of the West's backstory. Like a roaster lightly and lovingly giving the roastee a tender "going over", coddling his target out of a deep love and respect, Maguire delicately prods Baum's material, for instance, giving unintended meaning to or investing heavy with innuendo scenes and situations that the originator probably unintentionally left open to interpretation.

The book hinges upon the descent of the central character into a kind of madness. Maguire's Witch becomes a sort of Raskolnikov character, over thinking herself into believing her own mania, such as Dostoyevsky's anti-hero in Crime and Punishment. She is propelled by emotion, which she attempts to suppress, and an ideological movement, which she wholly embraces to the point of being enveloped by it. By the end, both have her wrapped within their choking grasp. Maguire's handling of this descent is relatively subtle. He takes his time to lay down some of the important breaking points in the Witch's life that eventually transform her from a little girl into a monster, a very real monster if not for the reasons she is perceived to be one.

I've read The Wonderful Wizard of Oz only once and have seen The Wizard of Oz movie countless times, so my ideas of how the story goes is skewed towards the Hollywood version. That's good and bad. Good, because this is one of those times when the movie improved upon the source material. Specifically, the movie cuts out a lot of unnecessary fluff that bogs the book down. Bad, because the movie distorts some parts of the book. That's not really a problem, unless you're trying to remember what's what and who's who in this Land of Oz Frank L. Baum created. Maguire relies heavily on the reader already knowing this stuff. If you don't, you'll be a bit lost in a wealth of new characters and creatures coming from Baum's pre-existing fantasy world. Maguire's layering on of politics will probably drag down the story and bore you. Plus you won't be in on some of the jokes! So yes, I'm suggesting you read The Wonderful Wizard of Oz before attempting Wicked.

It's taken a while for me to get around to reading it myself. I was under the impression that its appeal was directed towards women, since they were the only ones reading it. Certainly it has a feminine slant. Most of the principle characters are female. The other inhibitor was that Wicked had been turned into an extremely popular Broadway hit, heralded by a seemingly undiscerning, Disney-loving mass. The number of reviews right here on Goodreads by folks who first saw the show, then read this book and gave it a scathing review, seemed to back that theory up. However, that they lambasted it as "too vulgar", "not like the show at all", "too long" and that the musical "summed up the first half of the book in an 8 minute long song!" made me realize this was probably a really good book worth reading. If it makes non-readers hold their nose and back away, that's the book for me!