Robert Louis Stevenson:: A Biography by Frank McLynn
My rating: 5 of 5 stars

”He had long spidery limbs, was narrow-chested, walked with a slight stoop and was so thin that his joints made sharp corners under his cloths. 5’10” tall, he had fine bones, long sensitive hands, well-shaped feet about which he was vain, an oval face with high cheekbones, ruddy colouring, and aquiline nose like his mother’s and a large and expressive mouth that was described as a little tricksy and mocking. Yet his dark brown eyes were easily his most striking feature….” 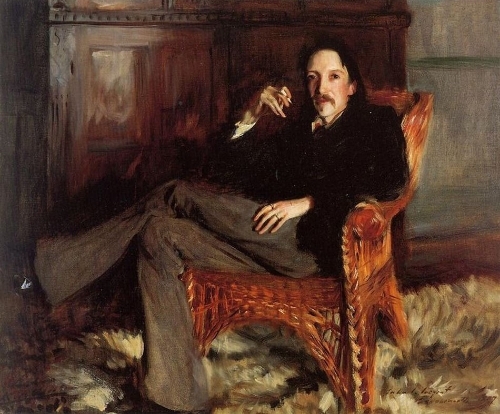 A portrait painting by John Singer Sargent. He really captures the spirit of RLS with the casual way he is sitting and the way his eyes peer out at those peering at him.

Not much of specimen, this Scottish Edinburgh man, but striking in appearance. Not someone anyone easily forgot. His father, Thomas, a burly, able bodied man who designed and built lighthouses as his father did, had to wonder how this spindly creature emerged from his loins. Despite their many disagreements, most around his father’s Calvinistic beliefs and the ever pressing concern the young Stevenson had for money, they loved each other. If Robert Louis Stevenson had been born in the mold of his father, there might have been a soldier named RLS or another in a long string of Stevenson engineers, but there never would have been the writer RLS.

Writing was something he could do to some degree while sick, recovering from being sick, or preparing to be sick again. His body was his enemy. He fought it constantly and was always trying to spring beyond its fragile borders to see the world with clear eyes instead of the fever shrouded ones he was given.

The fevers brought visions, apocalyptic dreams, pool of urine inducing spectres, and lurid images that had him screaming his way back to consciousness, clutching his hair in trembling hands, and feeling his heart pounding against his ribcage. ”But Stevenson never wanted to block the receptor to the unconsciousness entirely, for he recognized it as the true hidden spring of creativity.”

These night terrors brought him Dr. Jekyll and Mr. Hyde.

He wrote the first draft in a matter of days, like a man possessed. He brought it downstairs to read to Fanny, his wife; she hated it. ”This brought to a head the conflict between Louis’s desire to tell the truth as he saw it and Fanny’s wish for commercial success.” He was definitely a man of passion, of fiery Scottish temper, and also quick to tears. The argument became so heated that he...flung...the...manuscript...into...the...fire.

I want that manuscript!.

After he stormed from the room, did Fanny salvage it from the fire? No, I can almost see her shoving any partial pages that escaped the flames deeper into the fire, and I loathe her for it. I’m going to come back to Fanny.

So he went back up to his writing room and completed another draft of Dr. Jekyll and Mr. Hyde, which took into consideration his wife’s suggestions and was done in ten weeks. The story burned it’s way out of him, or it would have exploded his brain many years before the fatal aneurism that does eventually kills him in the South Pacific. The truthful version of DJMR was much more explicit with violence and sex. It was hard to say who was right, given the success that story has had and the influence the book has had on movies, television, film, and even art, but, of course, I can’t help but wonder about what was lost in the ashes.

There have been many biographies written about RLS, and all have differing opinions about the positive and negative aspects of Fanny Osbourne on the life of RLS. Frank McLynn takes a very hard line in regards to her behavior, and frankly, I agree with his assessments. RLS met her in France and became enamored with her darkened skin, pretty feet, and American sensibilities. He was coming off a rejection from another woman named Fanny Sitwell, who also had many of the same characteristics of Fanny Osbourne. It is easy to see that this Fanny was really a surrogate for the other Fanny. Both had husbands, which was also rather inconvenient. I don’t really believe, despite the natural attraction that women felt for him, that Stevenson had much experience with women beyond a few dalliances in the bordello and a few boyish crushes. He liked older women and may have been searching for someone to nurture him. He also had a strong morality, more of Thomas in him than either would believe, about taking advantage of women in any way, shape, or form.

When Fanny went back to her husband in America, several years later RLS was still thinking about her. He had finally amassed enough money to make the long trip from Scotland to California.

No one in their right mind would ever tell Stevenson to go West young man, unless it was with a team of doctors. He barely survived the journey, and he found a woman less than receptive to his presence. Some biographers have done some heavy sighing over how romantic this harebrained scheme of his of crossing an ocean and a continent to find his true love was, but the reality did not live up to the dream. It was a testy negotiation, with Fanny calculating his inheritance and the potential money he could make writing and wondering if she was exchanging a philandering husband for a walking corpse.

RLS won! Lost. Won. Well, I don’t know. Whatever that something something was that Fanny had, he was determined to have it. She did push him towards fiction more than the essay/ travel writing he was doing at the time, so I can’t really take the chance of unleashing my time machine from the stable and going back to 1879 and pushing her down the longest flight of stairs I can find.

Besides that would be wrong. It would, right?

I have several issues with Fanny: one is that she slowly poisoned him against all of his old friends, some of whom were instrumental in his development as a writer. She couldn’t stand him spending too much time with anyone other than herself. Two, she spent his money like a drunken sailor on shore leave in Singapore, and what she didn’t spend, her ambitionless kids Belle and Lloyd spent. Three, she resented his writing ability. She was a frustrated writer and frequently was too critical and not nurturing enough of his writing. Four, when he would get sick, she would develop some psychosomatic illness of her own that sometimes required a very sick Stevenson to try and tend to her. Five, she despised Treasure Island; she tried to block it ever being more than a serialized story, but fortunately, despite her efforts, it was published as a book. After his death, she discovered that the book was giving her the largest revenue, and with that knowledge, her opinion of the book changed as well.

I can feel my blood pressure rising, so enough about Fanny. 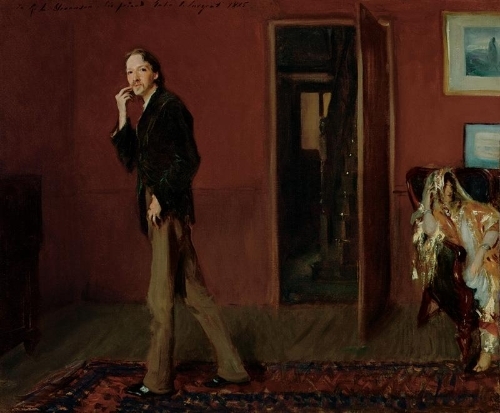 This is a portrait by John Singer Sargent of RLS and Fanny. I think it is utterly brilliant. Fanny of course didn’t like it probably because she was shrouded. I have a copy of this painting hanging in my home office.

Stevenson left a lot of unfinished works, some of them brimming with promise. He had too many ideas bouncing around in his head all the time. A new idea would light up his brain with new avenues to explore and in the process it would flounder another that he had started to write. His frequent illnesses often got him off track as well. He would often have to think of himself as someone else to escape his ailing body and let his mind be free. The climate of Scotland, and most of Europe, was too hard on his health. He finally settled on the island of Samoa for the last years of his life. Did he find rest and peace? Unfortunately, not very much. Finances were always a concern, and the large house and estate he bought were constantly draining away his royalties and his inheritance. His ready made family was not providing the comfort he deserved. Fanny had frequent bouts of depression that kept him in constant turmoil.

He died uncorking a bottle of wine. What a grand way to go if you are 84, but at 44, like the wine left in that bottle, there were a lot of wonderful stories left trapped in his mind, forever lost to all of us.

I have always had a special fondness for RLS. As a young lad of ten, I found a copy of Treasure Island at the library. It was the light that lit the flame of a lifetime reader. I read it three times before returning it to the library and then checked it out numerous times over the next few years. I owe him a debt that I can never repay for opening up a world of wonders to me. Books have been my constant companion. My moral compass. They tantalize me. They inspire me. They sooth me. They’ve chased the blues away and insured that I never felt totally alone in the world. They have made me who I am. Every book I pick up, I wonder is this another... Treasure Island.

Posted by JEFFREYKEETEN at 4:41 PM No comments: