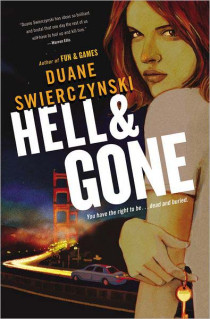 Picking up directly after the events of Fun and Games, we find Charlie Hardie in the clutches of The Industry or The Accident People or Secret America, or whatever you want to call them. While Hardie’s former colleague is on the lookout for him, finding him proves difficult. “They” don’t screw around when they have a task to accomplish and burying the whereabouts of Hardie is their number one objective.

Upon awakening, Hardie finds himself deep underground in a prison somewhere on Earth. I know that’s a little vague but Hardie knows next to nothing about where he is, what day it is or even what the time is so he’s more than slightly lost. Charged with the task of running the prison as Warden, Charlie is responsible for detaining prisoners with backgrounds so devious, neither himself nor his staff are to be told why they’re there. The punishment for not playing along? His family’s safety is on the line.

I’m really digging this series although I have to admit, it took me a while to really get behind this book. I feel like Swierczynski had a lot to live up to after the events of Fun and Games and while it took a bit to get going, he finished very, very strong. A few of the confrontations near the end came across as both intense and hilarious, especially his dialogue (view spoiler).

I seriously have no idea where Swierczynski is going from here. The final pages present a scenario so ridiculous that I can’t help but be interested. It’s unfortunate that there appears to be a delay in it’s release but I’m really looking forward to getting my hands on it.

Also posted @ Every Read Thing.
Posted by Unknown at 7:30 PM