Justice at the point of a lance 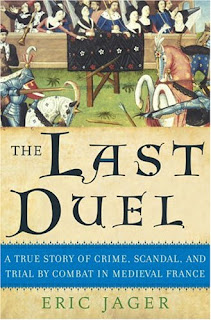 The Last Duel: A True Story of Crime, Scandal, and Trial by Combat in Medieval France
Eric Jager
Published by Broadway, 2004

Reviewed by Sesana
4 out of 5 stars

One man accuses another of a crime. The other denies it, and accuses the first of filing a false charge against him. Forensics aren't an option, and it's one man's word against another's. How do you decide who's telling the truth? In medieval France, the two men may duel to the death to prove who is truthful, because God will protect the honest man and help strike down the dishonest man.

This book relates the story of the last trial by combat sanctioned by the French government. The case is pretty simple: Jacques le Gris is accused by Jean de Carrouges of raping his wife. This is primarily seen as a crime against Carrouges, and not his wife, Marguerite. A quick word of warning: the assault itself is rather graphically spelled out. I presume this is because Marguerite gave very detailed and consistent testimony. But it is pretty disturbing, and I imagine it could be triggering. Was it necessary? No, not really, unless the point was to show just how sure she was of what happened.

The entire book is very detailed, and in a good way. Jager has obviously done tons of research, and clearly loves his topic. We know exactly what oaths were sworn when they went to combat, among other things. It makes it feel real in a way that a drier account of the same events would not. Sure, Jager could have skimmed over less important details, if he'd really wanted to. But we wouldn't have the same sense of place. And actually, it can be a thrilling read. This is the sort of book I'd recommend to people who like historical fiction, but don't read much history.

I have one very small issue with the book. Apparently, Marguerite later became the victim of an effort to clear the name of le Gris through slandering her, claiming that another man later confessed to having assaulted her instead. The book very nobly clears up that bit of slander by exposing it as an outright fabrication. The author also takes up Marguerite's side by pointing out that she pressed her suit, against overwhelming odds and the threat of death (if le Gris had been found not guilty through trial by combat, she would have been burned at the stake) and maintained a very consistent story. What it does not do is point out the underlying sexism here. It drives every turn of events from the assault itself to how it had to be prosecuted to the aftermath. I feel like the book is incomplete without addressing the institutional sexism that made everything we read here possible.