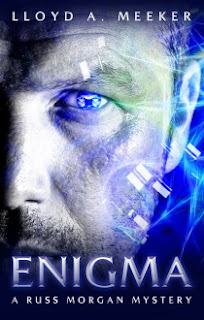 Lloyd A. Meeker
Wilde City Press
Reviewed by Nancy
4 out of 5 stars


Who’s blackmailing the high-profile televangelist whose son was famously cured of his homosexuality fifteen years ago? Now in 2009, that ought to be ancient history.

It seems there’s no secret to protect, no crime, not even a clear demand for money—just four threatening letters using old Enigma songs from the 90′s. But they’ve got Reverend Howard Richardson spooked.

Proudly fifty and unhappily single, gay PI Russ Morgan has made peace with being a psychic empath, and he’s managed to build a decent life since getting sober. As he uncovers obscene secrets shrouded in seeming righteousness he might have to make peace with a sword of justice that cuts the innocent as deeply as the guilty.


Enigma's ethereal new age sounds never really appealed to me, so it was not until I came across this story that I paid closer attention to their haunting lyrics and became curious about why they were so meaningful to the mysterious blackmailer threatening Reverend Howard Richardson and his family.

Rhys (Russ) Morgan is a 50-year-old private investigator recovering from alcoholism and determined to get his life back on track again. He is also an empath whose skills come in handy while interviewing the uncooperative and evasive Richardson family and their self-important, overbearing attorney, Andrew Kommen, who promises Morgan a hefty fee for solving the case quickly.

Morgan’s investigation leads him straight into the web of the troubled and deeply dysfunctional Richardson family. The ambitious Reverend Richardson takes great pride in the fact that his son, James, was cured of his homosexuality and is now a husband and father of three children. James has also worked hard expanding his father’s ministry into Latin America. Morgan’s unique ability helps him see through the subterfuge and realize that all is not well with James.

I loved this story for its exploration of Morgan’s past, the problems he currently faces, and the ties between his current case and his own life. His character is extremely well drawn and I’m very much looking forward to learning more about him and seeing his growth in future stories.

The mystery was easy to solve, but I can easily forgive that because the story is so wonderfully thoughtful and engaging. The lies, the truth, and the pain that is revealed here is heartbreaking, shocking, and unforgettable. The one thing I can’t abide though, is one of my major pet peeves. I really hate one-dimensional villains! Even though the truly evil villain does exist and fits well into this story, I needed just a little more complexity in his characterization that would have made this a 5-star read for me.

Best enjoyed while listening to The Cross of Changes.
Posted by Nancy at 10:00 AM