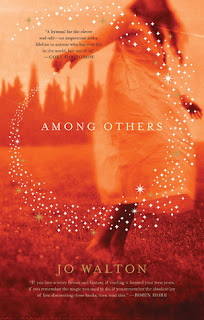 Among Others
By Jo Walton

"I care more for people in books than the people I see every day.”

uh....kind of the truth sometimes.

Morwenna Phelps is a fifteen year old who is a veracious reader, especially for anything Science Fiction, or 'SF' as she calls it. I was tempted to write down every book mentioned as this book moved along, but seriously that would have been more work than I really had the energy to do.

Among Others is written in the first person in the form Morwenna's diary, which begins after a horrible car crash that both Morwenna and her twin are in. Mor's leg is severely injured and her twin doesn't survive. Mor takes refuge in her books to get though it and heal.
“It doesn't matter. I have books, new books, and I can bear anything as long as there are books.”
Morwenna and her sister grew up seeing fairies and doing magic (very vague magic). Mor's mother is a very powerful and evil witch, for whom she blames for her twins death. Mor runs away from her mother to stay with a father who she has never met and is sent off to boarding school.

Everything that happens in this book, or diary, is all filtered through Morwenna and her SF books. Morwenna IS her SF books, so what might actually be happening and what Mor is telling us are likely two different things altogether.

I really enjoyed Among Others, a unique read, written in a style that I I truly liked. I haven't come across anything quite like this book. It doesn't give you many answers, it doesn't tie things up nice and neat, and I liked that.

“This isn’t a nice story, and this isn’t an easy story. But it is a story about fairies, so feel free to think of it as a fairy story. It’s not like you’d believe it anyway.”

Also posted at Goodreads.
Posted by stephanie at 12:04 AM