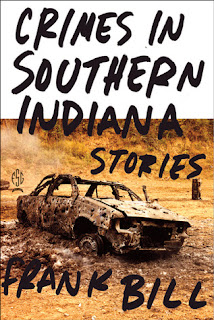 
Iris kept driving....He reached over and rubbed Spade between his black ears, not knowing where he was headed, but knowing he wouldn't stop until he was several states shy of the crimes in southern Indiana.

This book ::flails helplessly:: How do I begin to review these raw and ruthless stories and do them justice? I probably can't ladies and gents, but I want to try goddammit. Frank Bill's collection of crazies and crimes in southern Indiana deserves that much at least.

This is prose that sings -- not with the sweetness and harmony of a Mama Cass, but rather a whiskey-soaked growl and feverish screech of a Janis Joplin. It's jagged, fragmented, and toothsome; ready at any point to tear a chunk out of the reader and leave him or her panting and bleeding like the sordid cast of cutthroat characters that populate the pages of these 17 inter-connected stories.

The stories piece together a harsh portrait of poor, scrabbling, backwoods people -- where victims become victimizers, and the brutalized do their fair share of brutalizing in return. As Frank Bill weaves together his tales of madness and mayhem, he is not interested in telling mere exploitative snapshots of gratuitous violence; his carefully crafted stories resonate with gritty themes of PTSD, poverty, domestic violence, addiction, greed and corruption. Each story flashes bright and fierce, a powerhouse on its own, but when melded with its brethren featured in the collection, the sum definitely becomes more awesome than the parts.

Frank Bill is writing Southern Noir and making it his bitch. This is Quentin Tarantino meets Cormac McCarthy. For make no mistake Frank Bill convinces his readers that his Indiana landscape is also no country for old men.


Jagged marrow lined his gums like he'd tried to huff a stick of dynamite. But when he stuttered into Medford's ear he sounded like a drunk who had Frenched a running chainsaw.

This isn't a collection to love per se; it certainly won't leave you with the warm and fuzzies. It will shake you up and smack you around a bit though, and you definitely won't forget it easily. It also made me green with envy over how easy Frank Bill makes it all seem. What he accomplishes isn't easy; if it were we'd see the likes of this kind of writing more often. Bill's prose is rough; there isn't the same kind of lyricism to be found in these stories as is in the work of Daniel Woodrell, Tom Franklin, or even his closest kin Donald Ray Pollock. However, if you have a penchant for the raw and brutal side of life, this collection is required reading in my books.

A version of this review also appears on Goodreads.