Chaos and Order in the mythical Old West 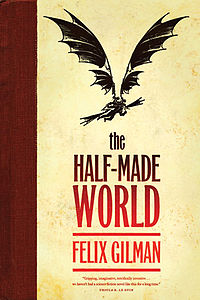 Order and Chaos. The Line and the Gun. The battle between the two elemental forces of order and chaos has long been a favourite for fantasy literature and it has provided fertile ground for many tales of human society as it gets caught in the middle of these two titanic ways of viewing the universe. What better stage for displaying this great and never-ending battle than the American West? What other time period more succinctly portrays the stark differences between these two great forces? Felix Gilman has taken this stage, albeit in an alternate world that only mirrors that of our own, in order to paint in the stark blacks and whites of this endless battle. Standing in for Order and Chaos we have, as has already been mentioned, the Line and the Gun. These two great unnatural (supernatural? abnatural?) forces are presided over by demonic spirits who drive on the humans in their service in an attempt to forever destroy their opposites. The Line are housed in great Engines that control and drive their human slaves in the name of industry and progress. Their tracks criss-cross the West and lay waste to all in their path, flattening the hills and mountains and filling in the valleys to turn all into orderly, flat wastelands populated only by their great Stations and factories. The Guns take a more personal approach, inhabiting their weapons of steel and wood and brimstone and riding their bearers, shaping them into superhuman gunslingers, able to move almost faster than the eye can follow and heal from grievous wounds in mere moments.

The alternate world that Gilman has created for this story has a great continent broadly divided into two great zones: the settled East, where things have been 'made' or 'shaped' into their final forms as we know them. Peace, order and (good?) government are the rule here and the countries of the East seem to combine elements of both the settled eastern states of the historical U.S. and the 'old world' of Europe. Science and Technology, law and order, are well-founded here, though not with the inflexible singleness of vision of the Line. Out beyond the borders of the map, however, lies the West. Beyond the great, and aptly named, World's End Mountains, lies a country that grows more lawless, and even physically unformed, the farther out you go. Only the Line has brought Order to parts of the West, but its order is a sterile thing, consuming all in its path and replacing it with factories and stations for its great engines, peopled by its hive-like minions who are driven to build and destroy in equal measure. The Agents of the Gun are themselves compelled by their masters to halt the Line wherever they are able, reveling in death and chaos no matter the price. Caught between these two forces are the small communities of 'normal' people who seem to simply sit back and hope that both the Line and the Gun will ignore their presence, at least in their own lifetime.

Amidst these great swathes of black and white, however, Gilman does manage to include many shades of grey in his story at both the macro and the micro level. At the macro level we have the Red Valley Republic, a gathering of many smaller nation-states of the unformed West under one banner and the leadership of the great General Orlan Enver. The Republic is another great power, able in its heyday to do the impossible: hold off both the Line and the Gun, and prosper in the unformed West. They are not, apparently, driven by any demons or supernatural forces, but only the human ideals and hopes of their founders...though these prove to be as dominating and heedless, in their own way, as the more metaphysical powers. At the micro level we have Gilman’s nuanced characterization, especially as seen in his three main protagonists who move the plot forward: Liv Alverhuysen, a bored widow and professor of psychology at the Koenigswald Academy who dreams of the possibilities of adventure that await in the West, John Creedmoor an aging charmer who also happens to be an Agent of the Gun, and Sub Invigilator (Third) Lowry, a lowly cog in the great human machine of the Line.

As the story proper begins the Red Valley Republic is nothing more than a dream and a memory: a failed fable and cautionary tale of the price of opposing the two great Powers. Liv has received an enigmatic letter requesting assistance from the aptly named House Dolorous, a hospital and hospice on the very edge of the settled West designed to care for those broken by the endless war of the Powers. She jumps at the chance to leave her comfortable and staid life behind and go into the unknown. Creedmoor, a somewhat cowardly and lazy adventurer who has been laying low and avoiding the call of his harsh masters, is suddenly prodded back into service and set on a track that will lead him to cross paths with the other main players of the tale. Lastly, we have Lowry, the lowly, but ambitious, peon of the Line, destined to rise in the ranks of the great machine as he too is goaded on by his masters to find the prize that all three characters will eventually pursue: the great General Envers, thought lost, though now convalescing at the House Dolorous in a fit of madness brought on by one of the horrible weapons of the Line. Apparently the general holds a great secret of the First Folk (the somewhat elvish, somewhat aboriginal, somewhat otherworldly first inhabitants of the West who are enslaved by everyone else when they are not free to roam the unformed wilderness), that both Powers crave for their own, and fear may fall into the hands of their enemies.

I really enjoyed this book, and Gilman's prose is very fluid, so even though it is a sizable tome I found that the pages flew by fairly quickly. This is my first introduction to what has been labelled the ‘Weird West’ in genre circles, and which shades mildly into areas of steampunk, and if it’s an indication of what else is out there in this genre then I’m excited to continue in my discoveries. I thoroughly enjoyed this book both for the extensive worldbuilding that Gilman did, as well as his admirable work with characterization. Each of the main protagonists is nuanced and interesting, and even Creedmoor and Lowry are able to rise above being simply placeholders for their respective Powers. For his part Creedmoor combines the nostalgic regret of an old gunslinger seeing something of the error of his ways, though held back from change by inertia and cowardice, while Lowry, despite being born and bred as simply a cog in a wheel, displays aspects of individual thinking and initiative that could just as likely get him killed by his Masters as promoted by allowing him to complete his goal. Liv stands in for the rest of us, those ‘normal’ people not beholden to any supernatural Power for their goals and abilities, and who must make her way in the world with only her own intellect and conscience to guide her. General Envers, even though insane and mostly silent for the majority of the book, is also a very interesting figure who, despite his affliction, looms large in the story and stands almost as a power unto himself.