﻿a shout-out to Tanith Lee! now this is one of those authors who holds a special place in many fantasy-lovers minds. some love her for all of the boundaries she seemed comfortable in ignoring, the ruthlessness, the vivid imagination, the perversity, the srange sexual situations, the often-lush prose, her chameleonic ability to write in many different genres. others loathe her for her often self-annhiliatingly passive heroines and her despicable heroes, prose that moves beyond purple into Ultra-Purple, a cold-blooded disdain in providing happiness for either her characters or her readers, etc. i understand the divisiveness, but i fall squarely into the former camp - at least when i was much younger. Tanith Lee & Jack Vance & Michael Moorcock & Roger Zelazny were my go-to fantasy and scifi authors for a long while, until i gave up on fantasy for a shameful period of at least 10 years or so. but i'm back to my favorite genre and plan on catching up with all of my old favorites, to see if the magic is still there. 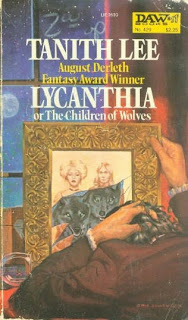 this is a tale of an insanely self-absorbed little twit of a pianist who returns to his recently re-acquired ancestral chateau. he's apparently dying and all he wants is a place to run to and hide, one where he can do his slow dance with death while moodily contemplating his sad life with all of the poisonous self-loathing typical to a Tanith Lee "hero". fortunately for him, he gets a new lease on life due to a pair of threatening yet strangely life-affirming were-cousins. unfortunately, some predictably ignorant peasants decide to get inbetween our sexy goth trio and their Lifelong Happiness At Last. damn, peasants are a real drag! especially if you are self-absorbed twit/pianist.

the above description does a profound disservice to this intriguing and rather gorgeously written bit of fantasia set in semi-modern times. but i couldn't restrain myself from the snark - it was almsot like i wanted to have some petty revenge on the confounding and infuriating hero. i'll try to do better later in the review.

i'm glad i started off my Tanith Lee rediscovery by reading Lycanthia. this is a slim story and i read it all in one evening. it is a bewitching one as well. i was entranced from beginning to end because it has literally everything my blackened little un-heart wants in my fantasy... Weird Ambiguity, a ton of it. Characterization that does not attempt to pull the reader's heartstrings and protagonists that are often stunningly unsympathetic and capable of doing terribly wrong things. Luscious, almost overripe prose, with frequent bits of dry gallows humor and sardonic self-awareness. Monstrous things that are not eye-rolling or corny. Cruelty & Tragedy & Despair that is not facile or there to check off boxes on the Gothic List of Necessary Things, but is carefully layered within the narrative and the characterization. a winding but not confusing plotline. a gothic atmosphere of mystery and potential violence.

"Atmosphere"... my gosh, Lee knows how to create it! her descriptions of the sinister forest, the eerie little village, the off-kilter and enigmatic supporting characters, and especially the chateau itself... wonderfully baroque detail-porn that i totally ate up. the whole rich stew is swooningly romantic - not so much because of romance between the characters (although there is a feverish yet childlike version of that), but rather because of the swooningly romantic atmosphere. a classic kind of "Romantic" - of the Byron, Shelley, and Shelley school.

the central theme of the novel is fascinating: the idea of Self-Aborption and its impact, how it ruins any attempt to truly understand one's surroundings, the people in those surroundings, the context of an entire place. Lycanthia's aristocratic asshole of a hero, and what befalls him and his lovers, is a perfect encapsulation of the deleterious effect of such a trait. some may howl at the moon and live only to consume life, like beasts - and those around them can tremble with fear or anger or even lust; others may howl and rage only at themselves and their lot in life - and those around them will find themselves betrayed by that all-consuming narcissism, destroyed by that terminal inability to connect with anything outside of themselves. oh the beguiling wonders of the Exotic East, the Ancient Orient, of heat and spice and jungle, of India!

oh the enchanting lures of Gold and Status!

oh the captivating charm of Power Over Women, to bend them to your will, to make of them your puppets!

there is a family in Victorian England. the patriarch made his wealth in questionable ways, in India, at the cost of many lives. the matriarch is from the stage, now trapped in her body as she is trapped in her country estate. one son is piggish and priggish; the other son a self-pitying sadomasochist. the daughter is mad, stark raving mad - but the quiet kind of mad, the kind that has the bones of tiny animals sewn within her petticoats, shhh, no one need know. there is a fallen child, fallen from upper to lower, now from the slums, her sister a murdered murderess. she joins this family as a kitchen maid, and then more, a victim and a victimizer, an instrument of unearthly revenge.

Tanith Lee weaves a strange and brilliant tale out of disparate parts. colonial India, made dark and eerie and threatening, the stereotypical wonders of the Exotic East turned inside out, made into an Other that no mere englishman can hope to understand. victorian life in a country manor, all the upstairs-downstairs melodrama tarnished and not-so-charming, made malevolent, turned brittle until ready to crumble into pieces. sexual sadism, stripped of its romantic veneer, made ugly and sickening - there is no victim embracing her victimhood here, there is just a girl trying to survive. phantasmagoria, slowly creeping, lurking in the shadows of the narrative, longing to take over the tale, and finally doing so in the end, destroying that narrative and transforming its characters.

i appreciated much about this novel. its refusal to make a particular sexual scenario 'sexy', its anger at exploitation in all of its forms, and its disinterest in explaining its magic. but i especially appreciated the level of its writing. the author writes like a dream, a dark and gorgeous dream. such beautiful prose! Tanith Lee, you cruel and perfect lady.

there is a scene with trained monkeys at a formal dinner. they are dressed and are able to act just like their upper class dining companions. a brilliant scene, hallucinatory and full of malice. and, happily, full of compassion for those clever monkeys.

there is an elephant, of sorts. it is from the past. it is coming to get you, upper class, it will rear and roar and trumpet and destroy. there will be a massacre in the manor. huzzah!