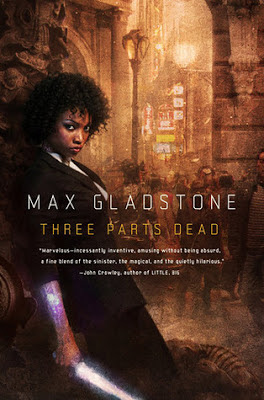 When your god has died, who ya gonna call? Why, the thaumaturgical firm of Kelethres, Albrecht, and Ao, of course.

At least that's what the priesthood of Alt Coulumb does when their fire deity, Kos, snuffs it (a rather embarrassing turn of events for a god billed as "Kos the Everburning"). Without his power driving the steam engines of the city, Alt Coulumb will eventually come to a grinding halt, so it is up to Tara Abernathy (the newest recruit of Kelethres, Albrecht, and Ao) to unravel the circumstances surrounding the death of Kos and determine if there is enough of the deity left to resurrect a remnant of his power to keep Alt Coulumb moving. To complicate matters, Tara suspects that Kos did not just die--he was murdered.

Welcome to Three Parts Dead, a novel set in an unclear time and an unclear place populated by Stone Men (gargoyles that can shift into human form), vampire pirates, Justice personified, fallen gods, deified humans and all other manner of weird and wonderful things held together by the Craft, the magic of starlight and earth wielded by Craftspeople like Tara. It's a world where gods use their power to barter with other cities and other gods, and where the death of one god can leave the whole world in a precarious position indeed. It's also a world still feeling the effects of the God Wars, a war between gods and Craftspeople that took place decades before and led to deep distrust between religious factions and practitioners of the Craft. All of this creates a complex mythology and political structure that hopefully author Max Gladstone has just begun to dip into as there's enough at work here to keep a well-written series going for several more books.

Gladstone's inventiveness is impressive and, despite a sometimes baroque attention to detail, the narrative never gets bogged down and moves along at a brusque pace. Unlike many fantasy novels, he largely avoids the "infodump" in favor of just dunking your ass into the deep end of the pool and seeing if you can swim, a method of storytelling I much prefer as it allows the reader to assimilate himself while exploring the world Gladstone has created.

If I have one complaint with the novel, it's that there is a lot going on, with a lot of people involved, and all at a breakneck speed. Frankly, I could have done with 50 more pages if it would have slowed things down a bit as a ridiculous amount of narrative happens in the span of what is apparently two days.  While the villain is a little obvious, the creative manner in which the antagonist is discovered and dealt with more than makes up for it.

Overall, this was one weird little ride that I enjoyed the hell out of--so much so that his next book, Two Serpents Rise, is already on my pre-order list.
Posted by Amanda at 8:00 AM