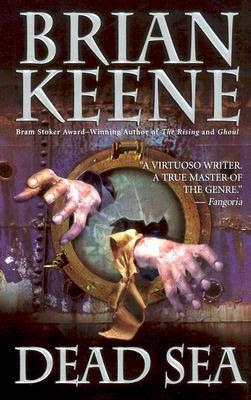 Brian Keene
Leisure Books
Reviewed by: Nancy
5 out of 5 stars


With zombies taking over the cities, a group of humans escapes the carnage by taking a small Coast Guard ship out to sea, but there's no getting away-even in the wide ocean.


Brian Keene’s Dead Sea is a little different from his earlier zombie stories. In The Rising and City of the Dead, the zombies carried rifles, were intelligent, and drove cars. In Dead Sea, they are the more traditional shambling, empty-eyed, mindless variety. The end of the world began in New York City, when people were attacked by swarms of undead rats. The infected died and came back to life. Once the infection (known as Hamelin’s Revenge) spread to the city of Baltimore, Lamar Reed, Mitch and two orphaned children flee the city and escape on a ship with a handful of survivors.

Though the gore factor is high, Dead Sea is not a story about hungry, mindless zombies. The story is told by Lamar Reed, a gay black man who grew up in a bad section of town, yet resisted a life of drugs and crime and was gainfully employed at a car parts manufacturer. Once he got laid off from his job, he had to resort to desperate measures in order to pay his bills. When Hamelin’s Revenge strikes, this becomes the least of his worries. Lamar is now faced with the task of survival amidst the slaughter of Baltimore’s population and with the responsibility of caring for two children.

Like Keene’s earlier zombie novels, the author puts his characters through myriad horrors. During his struggle to survive and ensure the safety of the children in his care, Lamar changes, grows, and becomes a better person. Keene, a white hetero male, portrays Lamar’s character with respect and sensitivity and without resorting to stereotypes. Unfortunately, Lamar lives in a world where there is little hope for the human race.

Dead Sea was gripping, suspenseful, gory, bleak, and impossible to put down. Despite the characters’ strength and will to survive, there is a sense of hopelessness that pervades the novel. A must-read for zombie fans!

Also posted at Goodreads.
Posted by Nancy at 7:00 AM