Star Crossed Lovers in a Galaxy Far, Far Away 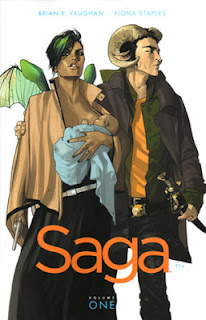 How to describe Saga? It's like someone took Firefly, coated it liberally in WTF, and sprinkled a little Quentin Tarantino on top. Yeah, it's some wonderfully messed up stuff.
﻿﻿﻿﻿﻿﻿
The planet Landfall is at war with one of its moons, known as Wreath. The indigenous people of Landfall seem reliant on technology and sport some nifty little insect-like wings, while the people of Wreath have horns (they may be my favorites as each character in the later issues has horns varying from rhino, to antelope, to ox--you get the idea) and are skilled in the use of magic. The war between these cultures has become an accepted part of life, the hatred of the enemy deeply ingrained in both species.

Now enter Marko and Alana, from Wreath and Landfall, respectively, who are ex-soldiers in this war. Defying their cultures, they have fallen in love and the birth of their newborn child, Hazel, has marked them for termination by basically everyone in the universe. Both have known violence and are adept at using it to protect each other and Hazel. On the run from the numerous assassins tracking them, they banter away like a married couple and slowly reveal the history that brought them to this juncture.

And now a convenient list of the absurdities that await the Saga reader, so you can gauge whether or not the "WTF" element is for you:

--a planet known as Sextillion that specializes in, you guessed it, sex, but not just any mundane sexual act; this place is like the Baskin Robins 31 flavors of sex
--prostitutes that consist of giant heads teetering on top of Rockette style legs
--a forest that actually grows rocketships
--a race of robots that have television screens for heads
--graphic sex scene featuring the aforementioned robots
--a topless assassin who is all woman (sans arms) from the waist up and all arachnid from the waist down
--the ghost of a teenage girl who must have suffered a gruesome death as she's nothing but hanging intestines from the waist down; naturally, she tags along as Hazel's "babysitter"﻿﻿
--and LYING CAT, my new favorite comic book character is a giant feline sidekick to The Will, one of the assassins contacted about offing Marko and Alana; Lying Cat can detect whether or not others are engaging in a bit of creative truth telling
﻿
﻿
While the base storyline is one we've read before, the execution is unlike anything I've ever read. Vaughan gleefully injects new and intriguing absurdities into the premise and it's really difficult to get a fix on where this sucker is going--but that's part of the great thing. The ride is so much fun that I really don't care. The artwork by Fiona Staples has a raw and edgy quality that suits the storyline perfectly.

I've been getting the monthly issues, which have the added benefit of a letters section in which Vaughan responds to reader letters. The results are often hilarious and I find myself looking forward to this section with the same anticipation I look forward to the storyline. 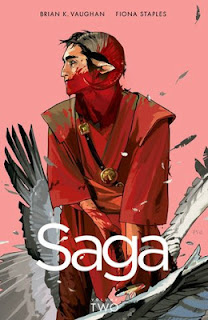 In the first 6 issues of Saga (which comprised volume 1 of the trade edition), Brian K. Vaughan threw in enough weird ass shit to keep me in a delightfully perpetual state of "what the hell was that?" So much so that I worried the inventiveness might eventually wear thin, begin to feel as though it's trying too hard (as I sometimes feel with China Mieville's Dial H), or simply create such a labyrinthine mythology that it's just not worth trying to puzzle it all out. The second 6 issues have definitely allayed those fears as they are as outrageous and genuine as the first story arc, losing none of the bat shit craziness or heart.

﻿
Hazel, the newborn daughter of Marko and Alana, continues to narrate the story of her parents from an unknown point in the future. Marko and Alana, both soldiers from two warring alien races, have a romance that reads like Romeo and Juliet on crack. On the run as fugitives from their respective races, they continue to search the universe for a safe place to live, love, and raise Hazel. But, alas, bounty hunters continue to plague them and, worst of all, the sudden appearance of ex-flames (an enraged Gwendolyn, Marko's one time fiancée) and in-laws (Marko's parents seek out their wayward child at the worst possible of times, complicating his escape with Alana).

This arc provides background on several significant characters, including how Marko and Alana met, as well as the history of the relationship between The Will and The Stalk, the star-crossed (and bad ass) bounty hunters hot on their trail. For those uninitiated to Brian Vaughan's work, however, be forewarned: there will be sex scenes, giants with pendulous scrotums, and enough deviant behavior to make Sodom and Gomorrah blush with shame. However, I also appreciate the maturity with which the relationships are portrayed--they're real without being romanticized. Saga works beautifully because of this and because of the huge debt the series owes to illustrator Fiona Staples. The work of any other artist could have made Vaughan's ideas too cartoonish, too over-the-top, but Staples's work is the right mesh of quirky and realistic that roots this world in an organic quality that gives it weight and authenticity.
﻿
In short, I can't praise Saga highly enough. It's a testament to what comics can achieve when writers and artists are let off the leashes of pre-conceived, "safe" concepts and allowed to chase after their most vivid, fevered imaginings.