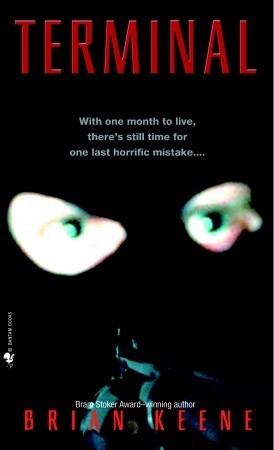 Brian Keene
Spectra
Reviewed by: Nancy
3 out of 5 stars

Tommy O’Brien once hoped to leave his run-down industrial hometown. But marriage and fatherhood have kept him running in place, working a job that doesn’t even pay the bills. And now he seems fated to stay for the rest of his life. Tommy’s just learned he’s going to die young–and soon. But he refuses to leave his family with less than nothing–especially now that he has nothing to lose.

Over a couple of beers with his best friends, John and Sherm, Tommy launches a bold scheme to provide for his family’s future. And though his plan will spin shockingly out of control, it will throw him together with a child whose touch can heal–and whose ultimate lesson is that there are far worse things than dying.


25-year-old Tommy O’Brien learns he has terminal cancer and has only a month or so to live. He has no health insurance, is deep in debt, and recently lost his job. Desperate for cash and wanting to provide for his wife and son, he and two best friends, Sherm and John, plan to rob a bank.

The main character is very well drawn, his suffering and desperation very real. This story accurately portrays depressed US industrial towns and their inhabitants who have lost jobs and are unable to get out of poverty. It is a bleak exploration of the finality of death and life's possibilities after learning you don't have much time left.

Tommy is a very likable character who’s easy to connect and empathize with.  He loves his family deeply and doesn’t want to hurt them by telling them he has cancer.  I wanted him to succeed, even though he made a lot of wrong choices.  His wife and son were interesting characters who could have been developed further.  I also would have liked more about Tommy’s feelings concerning his impending death.

This was an engaging and compelling story that was difficult to put down.  Once the bank robbery got under way, the story became very predictable.  Tommy’s friend, John, is a little slow, but basically a likable guy.  Sherm was always crazy, his dark nature becoming more apparent later on in the story.  Tommy just wanted the money; he never intended to hurt or kill anyone.  Things go wrong and hostages are taken – among them an old man with a heart problem, a single mother and her son with unusual abilities, a nutty religious fanatic, and an overweight loner who likes comic books.

Most of the hostages were stereotypes and not very well developed, especially Martha, so I really didn’t feel too much when the body count started to rise.  The most interesting hostage was the little boy with a healing touch.

Reading Terminal is like watching a train wreck in slow motion.  You just know that nothing good will happen, but you can’t stay away.

Also posted at Goodreads.
Posted by Nancy at 9:35 PM