I'll take my post-apocalyptic zombie fic with a side of Southern Gothic, please! 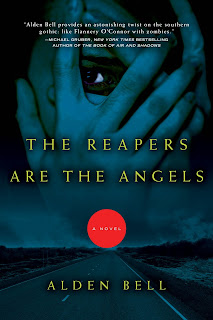 The Reapers are the Angels

Well, I gotta say I didn't expect that ending.

_The Reapers are the Angels_ is my first foray into the très au courant genre of zombie apocalypse. It was a fortunate choice and I can only hope I enjoy other forays into the genre as much. One thing I can say is that it’s definitely a real page-turner . The story of Temple, the young bad-ass action-grrl born into a world after the rise of the undead, is compelling and engrossing and has definitely got velocity. Temple herself is interesting, a strangely positive girl despite the darkness of her past and the violence of both her world and her deeper character. She's a strange oxymoron, an optimist who seethes under the surface with supressed rage. I suppose she could be seen as yet another product of the Buffy/Katniss/whatever-action-grrl-of-the-moment template, but I thought she generally came across as being much more real than that stereotype would imply. She may be a warrior princess of sorts, but Temple has a certain naïve charm that sets her apart and she rarely goes looking for trouble, though of course it often finds her. Temple is also interesting in that she was born into the world of the apocalypse, so the status quo doesn’t disturb her in the same way as it does the survivors from the old time. She doesn’t see the world as a punishment and a curse, but rather as a gift. She sees the hand of God in everything and even the fact of the shambling dead is a miracle when you look at it from the right angle. It’s an interesting perspective however off-the-wall it might seem.

The other major element of the novel is its prose. The southern twang that nearly drips off the page is a joy to read and makes the novel seem, on the one hand, very literary. Yet there was another element to it that kept breaking through in the back of my mind and which occasionally broke the spell of the prose itself: this is also a novel that very much reads as though it were written with the cinematic version strongly in mind. At times it is almost like a movie treatment for the soon-to-be-produced vehicle starring the next Jennifer Lawrence as Temple (maybe Chloe Moretz? She’s young enough and certainly her stint as Hitgirl in ‘Kickass’ gives her some of the required experience in extreme violence). This isn’t exactly a bad thing, I guess, and the author is welcome to any income he can derive from his work, but it was a little distracting sometimes to think “ah yes, I can just see the dollar signs in the author’s eyes as he wrote this scene just for the big screen.” Unfair of me maybe, I don’t know, but it was a feeling I definitely got from time to time while reading. That said, this is still a great novel to read and it’s simply filled with the poetic palaver of the South so mellifluous to Northern ears.

Aside from being both a quest road-trip and the story of a young girl (who’s really more of an adult in all but the most literal temporal sense) coping with her past as she faces her future it is also, as others have pointed out, definitely a story about the American landscape. It’s a blasted and decayed landscape, but one where the character of its past still shines through in what remains. Ironically it seems to be those who are most willing to let go of this geographical memory that are most likely to succeed in this new world as opposed to the hopeless dreamers trying to claw their way back to the world of civilization and who pretend that their little enclaves of the old world are anything other than a fantasy.

I’ll conclude by saying that Alden Bell also did a great job of building up his characters and even those who had little more than a walk-on were generally interesting and unique. A shout-out has to go to Moses Todd one of the better villains (or perhaps I really ought to call him an antagonist) I’ve come across in awhile. He’s nearly as compelling as Temple and seeing the two of them together was nearly always a treat. I’m surprised to see this listed as book one in a series, but I’m willing to go along with Bell in his further forays across the twisted landscape of undead America.

Also posted at Goodreads
Posted by Terry at 10:54 AM