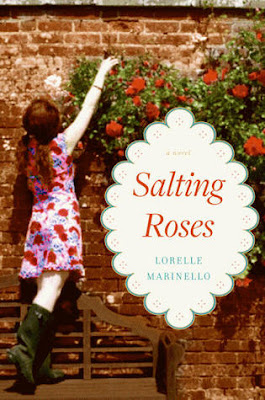 
Salting Roses purports to be a novel brimming with Southern charm. Oh, it's brimming alright. Ridiculously so. Welcome to the land of Southern stereotypes and Bible Belt cliches. This is right up there in Sweet Home Alabama territory and if Reese Witherspoon is looking for another romantic jaunt in a charming make-believe South, here it is. If you haven't guessed by now, I'm not the target audience for this novel, so maybe it's unfair for me to proceed from here. But like that's ever stopped me before.

As a baby, Gracie Lynne Calloway was left in a bucket on her uncle's doorstep with a note from her mother asking him to watch her for a spell. A spell soon turns into 25 years and Gracie, now an adult and nursing old emotional wounds from being labeled the town bastard of Shady Grove, Alabama, is in for a shock--she's not who she always thought she was. A stranger (who is literally tall, dark, and handsome, just in case we miss that he's our prospective love interest) brings her the news that she's actually the kidnapped daughter of the wealthy financier Conrad Hammond of Connecticut. She has been named the sole heir of $650 million dollars. What's a simple Southern girl with a love of baseball and a cushy job in the backroom of the local grocery store to do? Why, turn it down, of course! Because if she accepted it, there would be no plot complications and we wouldn't have this trite little novel. Gracie has been raised to distrust those born with a silver spoon firmly in mouth and fears the money will bring too many problems to her quiet and unexceptional life. Yeah, I'm not buying what they're selling here. $650 million dollars? Who wouldn't accept that? At least one could accept it and proceed to do a lot of philanthropic good (of course, I would just use it to wallow in pure hedonism, but different strokes for different folks).

There are several things that ruined the book for me:

A) These are all stock Southern characters that are presented as though they are supposed to be quirky. They're not. They don't even dance around the edges of eccentric. We've seen them a thousand times before in literature and in movies. If you're going to play up the quirk factor in Southern literature, go big or go home.

B) I'm not a fan of romance novels and had I known this was a romance in Southern fiction clothing, I would have ran the other way. However, even I know that in a good romance novel there has to be some will-they-won't-they tension. There's none here. We know as soon as Sam Fontana walks in the door and Gracie starts having dirty thoughts that he's the man she's been waiting for. And if you're pissed over a plot spoiler, be upset with the novel--it makes no pretense that it will turn out otherwise. There's not even the introduction of another prospective suitor to throw the seasoned romance reader off track.

C) Serious crimes against vocabulary in the overuse of the following words: sass, sassy, Yankee, princess, and sugah. Apparently,we're all sassy down South and we hates us a Yankee. Foghorn Leghorn has more character complexity.

D) A plot that gets more and more ridiculous as it goes on. If this had been reined in a bit and been a realistic portrayal of realistic people then something could have been salvaged. As it is, when I managed to suspend disbelief long enough to wrap my mind around one nugget of ludicrousness, here came a side order of absurdity.

I like Southern fiction when it's done well. If you're looking for good Southern/regional chick lit, might I suggest The Secret Life of Bees by Sue Monk Kidd, The Help by Kathryn Stockett, or Big Stone Gap by Adriana Trigiani. If you're looking for authentic Southern lit, read Winter's Bone by Daniel Woodrell, True Grit by Charles Portis, Ava's Man or All Over But the Shoutin' by Rick Bragg, or anything Larry Brown. They're all preferable to Gracie and her whining about being a $650 million dollar princess. Now, I'm gonna go put me some sugah in a glass of iced tea and sass some poor unsuspecting soul. I hope it's a Yankee.
Posted by Amanda at 10:34 AM