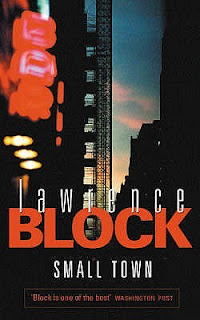 Apparently one of my favorite mystery writers has a bit of a kinky side.

This one seriously shocked me when I first read it back in 2002.  Part of this was because Lawrence Block represents New York to me in a lot of ways, and it seemed like this book was his response to 9/11.  While the shadow of that day hangs over everything, it was odd to find that a big part of the story also involved nipple rings, bondage and various sex toys.

The story starts several months after the Twin Towers collapsed.  The body of a murdered woman is discovered in her apartment, and a writer named John Blair Creighton is arrested since he admits that he went home with her after they met in a bar.  Art gallery owner Susan Pomerance gets fascinated by the case since the woman had been her realtor, and her morbid curiosity about the murder and Creighton comes as she discovers an increasing desire for new sexual experiences. Former police commissioner Francis Buckram is bored and killing time with public speaking engagements and considering running for mayor in the next election.

A series of shocking murders occur by a man the press dubs The Carpenter because of his use of a hammer as a weapon. Block reveals to the reader that killer was just another retired middle-aged New Yorker who lost his entire family because of 9/11, and now that grief has transformed into an insane belief that the city requires a series of sacrifices to sustain itself.

Block does a nice job of developing all of these characters and many more supporting players like a gay alcoholic cleaner who discovered the first body and finds himself an unwitting player in The Carpenter’s delusions.  By putting together a series of chance encounters that have profound impacts on those involved, Block really does sell the idea that New York is really a small town when viewed from insides these webs of relationships.   I particularly enjoyed the story of how Creighton’s shame at being accused of murder turns into the best thing for his life and career.

But damn there’s a lot of sex in this…..

Susan’s erotic adventures include a wide variety of encounters and Block spares no detail.  It’s the same type of stuff he’s done in other books like Getting Off, but where he combined sex and murder seamlessly in that one, he never quite gets the same thing going here.  Susan’s story seems removed and distant from what else is going on in the book despite her  being one of the key links between everyone.  Going from a story about a man driven mad by 9/11 and showing how this effects various New Yorkers just doesn’t fit with the sexual encounters of a woman exploring her kinky side.


I think part of my disappointment stems from the notion that this was going to be Block delving into what 9/11 did to New York, but other than The Carpenter, none of the characters make anything other than causal remarks or observations about how the city has changed since.  For me, Block had deeper and more meaningful things to say about the subject when he wrote about how his professional killer character Keller reacted in Hit Parade.