Suffering from Superhero Fatigue? Image Has the Cure for What Ails You!

Does the tidal wave of superhero flicks at the movies, the never ending "Biggest Crossover Event in History!"  comic series specials, or just the nakedly aggressive marketing of the big two publishers in comics have your tights in a bunch?  Never fear--Image is here!  (And, seriously, what the hell were you doing in tights to begin with?)

Now, don't get me wrong, I love the established franchises as much as the next gal, but sometimes I get tired of having a bazillion different titles revolving around the same superheroes, the watered down content to keep the PG-13 crowd dropping coin, and the lack of fresh ideas that comes with trying to keep tried-and-true superheroes relevant to the next generation.  And that's what makes the comics of indie publisher Image so great.  They're not afraid to take chances--just look at writer Brian K. Vaughan and illustrator Fiona Staples's unpredictable space opera Saga (a comic whose praises I sung in a previous review, if you want to look it up).  Image knows the value of a self-contained story, fresh characters, new worlds, and adults-only content (because not everyone who reads comics in 13 years old).  So, without further ado, let's look at some of my recent favorites, available at a comic shop near you: 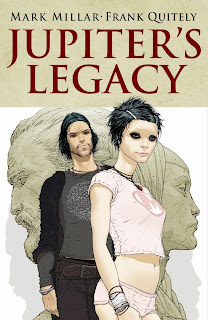 A new spin on the superhero tale, Jupiter's Legacy explores the pressures and pitfalls of celebrity when your parents just happen to be the most powerful beings on the planet--and they are uncompromising in their belief that you, too, should be using your powers to protect and defend humanity.

Brandon and Chloe are the hedonistic and nihilistic (two fancy words for "asshole") children of the Utopian, the leader of the first generation of superheroes (the how and why regarding their acquisition of supernatural power remains cloaked in mystery).  Their privileged upbringing has not come without a price--instant fame and its attendant henchmen: drugs, alcohol, and casual sex; the heavy weight of responsibility to others at the sacrificial cost of the self; and a domineering father whose ethical code is noble, but clearly flawed.

Jupiter's Legacy does veer dangerously close to soap opera territory (feuding families, ill advised loves, generational power struggles, reckless behavior), but that's part of what makes it fascinating in a reality tv sort of way.  It asks the question of are these bright, shiny, gifted people as happy as they appear to be on the outside?  The answer, of course, is an unequivocal "no."  The Utopian in particular is a fascinating character.  Consistently disappointed in the antics of his children (isn't it embarrassing when your super-strong son gets drunk and decides to lift a cargo ship in a misguided attempt to get it to port more quickly?), he's also at odds with his brother, Walter, whose powers manifested themselves in more psychic/intellectual ways.  The Utopian seems mired in the past, dedicated to the idea of the superhero as the strong arm of the law, while Walter advocates for superheroes who take a more politically active role in changing the world.  Frank Quitely's art is beautiful (although some of his younger characters will inexplicably look like elderly versions of themselves in some panels), and Millar raises some interesting questions about morality, responsibility, and family. 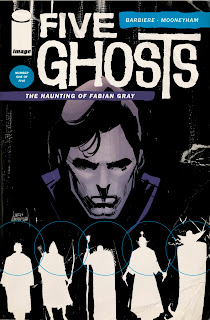 Part Indiana Jones, part Gambit, part James Bond, and all pulp, Five Ghosts is a fun throwback to the classic adventure narrative of the 30's and 40's.  Fabian Gray is a charming and handsome master thief who has spent his life acquiring some of the world's finest antiquities, with the help of his twin sister.  However, when he and his sister attempt to steal The Dreamstone, things go cockeyed.  Now his sister is in a coma and Fabian has five shards of The Dreamstone lodged in his chest--and within each stone is the essence of an archetypal figure:  the detective, the samurai, the wizard, the archer and the vampire.  Trapped within Gray's body, Gray can draw upon the powers of these "ghosts" to aid him in his newest quest--to find the artifact that will cure his sister.

Set in the 1930's, Mooneyham evokes the look and feel of the pulp comics from that time period adding to the overall narrative.  Things won't be easy for Fabian--supernatural forces are working against him, exotic locales must be visited, beautiful women need ravishing, and the "ghosts" are becoming increasingly unhappy over their imprisonment within Gray.  Granted, if you were to just tell me the premise of this comic I would dismiss it for setting off my "that's ridiculous" alarm, and this is one of the advantages of your local comic book shop:  knowing what I enjoy, I was encouraged by the owner to give this a whirl and I'm glad I did. 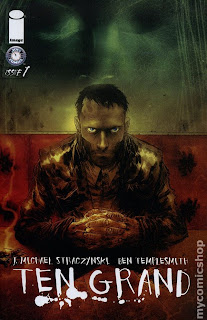 A supernatural noir, Ten Grand is another title with a ludicrous premise that works beautifully.  A former mob hitman, Joe Fitzgerald's life is turned around when he meets and falls in love with the angelic Laura.  Convincing Joe to leave his life of crime behind, Joe agrees to one final mark before retiring.  Unfortunately, the target of this hit just happens to be engaged in a demonic ceremony when Joe comes for him.  I cannot stress this enough:  if you catch someone in the act of summoning the forces of hell, do not fuck with them.  Because then they track you down, kill the love of your life, and leave you for dead.

As Joe is drawing his final breath, an angel comes to him with an offer.  Behind curtain A we have:  die now and spend eternity in the fiery pits of hell far away from your Laura.  And behind curtain B we have:  work for us and every time you die a righteous death in our service, we will grant you 5 minutes with Laura.  Joe picks curtain A and is now known for helping people in occult matters.  His fee?  Ten grand.  Just enough to keep the lunatics at bay.

Joe is a traditional pulp/noir anti-hero, having a moral code that's compromised by the life he's led and the understanding that life is painted in shades of grey.  At this point, Joe's been around long enough to become jaded to how the battle between good and evil is played out, but he's about to be surprised  by how the past you thought was dead and buried can come back with a serious grudge.

Straczynski dialogue is witty and full of subtle one-liners and dark humor (I love it when Joe goes to a strip-club to summon forth an angel into the vacant vessel of the bored pole-dancer) and I can't say enough about Templesmith's art.  At first I wasn't sure about his style, but it perfectly suits the gritty, seedy world Joe inhabits and evokes an almost cave-wall primitive simplicity, which is a perfect match for a story that boils down to the battle between angels and demons with man caught in the middle. 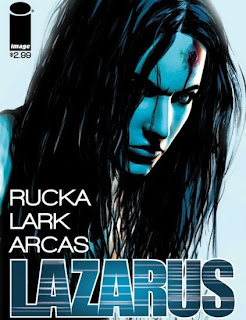 Did I save the best for last?  Oh, hell, yes I did!  Only one issue in and I'm hooked.  Lazarus is set in a dystopian future where traditional political and financial systems have collapsed and from their dust rose The Families.  The Families are futuristic feudal lords who own all of the land and all of the wealth.  While they have pledged to provide every man, woman, and child with the basic necessities, it quickly becomes clear that they mean "basic" in the most literal sense.  Those who do not work on their mega-farms are known as The Waste, who are viewed by The Families as parasites for their inability to live on what little the families provide to them.  As we learned from Marie Antoinette, when people get hungry, they get angry and they apparently want more than cake.

Knowing this, The Families select one person from their line to become the Lazarus.  The Lazarus is given every intellectual, physical, and technological advantage available with the intent of protecting The Family and its assets.  For the Carlyle family, their Lazarus is the literally death-defying woman named Forever.  While kicking ass and taking names, Forever has developed a crippling side-effect for an assassin.  Forever is suffering from a conscience, and The Family (or at least her brother) isn't happy about it.

Larks's artwork is lean and austere, and his rendering of Forever is a mini-miracle.  She's beautiful without being highly sexualized, but you never have any doubt that this is a woman who has the ability to remove your heart from your chest if circumstances demand it.  At this point, there's only one issue of Lazarus, but this is an exciting and intriguing premise.  I can't wait to see where Rucka and Lark take us in future issues.
Posted by Amanda at 1:51 PM