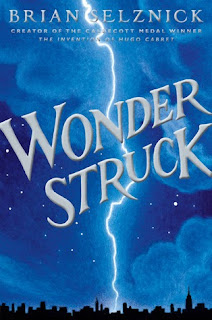 Review by Sesana
Five out of five stars

Wonderstruck is two separate stories that meet and intertwine at the end. Set 50 years apart, Rose and Ben live rather different lives, with more and more crossover as the book develops. In 1927, Rose lives just outside New York City. She's deaf, and her father doesn't want to let her leave the house. Not safe enough. Desperate for a certain amount of freedom, and to see a silent movie star she's somewhat obsessed with, she runs away to the city, and the American Museum of Natural History. In 1977, Ben live on Gunflint Lake, in Minnesota. When we meet him, he's deaf in one ear, his mother has recently died in a car accident, and he's looking for clues that will lead him to his father. And then he gets struck by lightning. Still, even after the accident, he's determined to follow those clues, which will lead him to New York City, and the American Museum of Natural History.

Readers of Selznick's previous, wonderful book [book:The Invention of Hugo Cabret|9673436] will recognize the format, part words and part pictures. Here, Ben's story is told entirely in words, and Rose's is told entirely in pictures. It's very effective, Selznick's lovely art aside. Watching Rose's story slowly unfold in pictures lets the reader discovery her story gradually, and it lets us experience the world soundlessly, as she does. I also like how he illustrates what are normally cinematic techniques like zooming in or out, something he did in Hugo Cabret, too.

But much as I loved Rose's half, Ben's was every bit as good. Poor Ben. I felt so bad for him before more than a few pages of his narration had passed, and then it gets worse. He goes through so much looking for his father, but it all comes honestly. Nothing felt amped up for dramatic impact, or like something that a boy his age wouldn't naturally do. And he's just so likeable, and such a sympathetic character, that it's easy to root for him to find what he's looking for.

Luckily, Selznick is every bit as talented of a writer as he is an artist. Both the text and picture portions of the story were equally compelling and well done. At no point did I find myself counting pages until I got through one perspective and back to the other. That can be a hard thing to do. I hope that Selznick has more books like this and Hugo Cabret in him. I'll be delighted to read them.