A Magical and Melancholy Reflection on Childhood 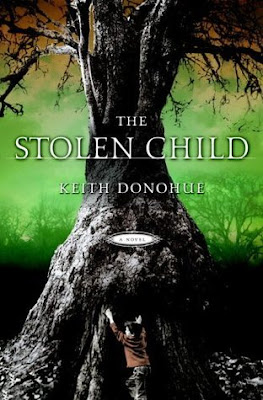 The Stolen Child
by Keith Donohue
Published by Nan A. Talese

Feeling ignored and tired of his infant twin sisters getting all of the attention, young Henry Day decided to run away one day in the 1940's. Henry never returned home; in fact, he ceased to exist, but no one noticed. Why? Henry was abducted by the hobgoblins who lived in the nearby forest and a changeling was left in his place--a changeling who had been studying everything about Henry and knew how to mimic him so perfectly that no one could tell the difference. The Stolen Child follows the boy and the changeling for the next 30 to 40 years and tells their story in alternating first person narratives that, in the beginning, are a little confusing, but rightly so as both children are confused about their identities as they each adapt to their new world. Their lives run parallel to one another and occasionally intersect to disastrous results.

A friend of mine described this book as "melancholy," and I think that's the perfect adjective to sum up my feelings after reading this book. For one, the changelings are not villains. They are all children who had their lives stolen from them and are now biding their time until they can reclaim what was forcefully and brutally taken from them. As a result, I feel sorry for both Aniday (the name given to Henry after he becomes one of the changelings) and Gustav (the changeling who takes Henry's place). Often in a fantasy, you get the joy of hating the evil-doer or the monster lurking in the dark, but here the evil is something nebulous and never clearly defined. I think this is partially due to the allegorical nature of the plot. In a sense, life is the monster in that it's a force of nature that can't be stopped or reasoned with. For each of us, our childhood must eventually end and, as children, we often can't wait to grow up and find out who and what we'll be. To do so, we have to cut ourselves away from the child we were so that we can embrace the adult we'll become. We leave a "changeling"--a collection of memories, childish desires, and emotions that revisit us throughout our lives, but the child version of ourselves is like a stranger we once knew.

Also, as we get older, many of us look back on the innocence of childhood with a sense of nostalgia and think, if only upon occasion, "if only I could go back" or "wouldn't it be great to be a child forever?" The answer provided by Donohue is no; that the romantic view of childhood is just that--the tinge of rose-colored glasses. The changelings are not The Wild Boys; sure they are given to fun, frivolity, and mischief, but theirs is not a life to be envied. It is a constant struggle for survival against the harsh elements and the encroachment of man as civilization and suburbia threaten the wilderness where they are able to secret themselves away. They long to grow up and are trapped in tiny bodies while their emotional and mental maturity continues, unimpeded. They wait and they yearn and they think about all they will never have and all they will never be.

In presenting the changeling myth for modern times, Donohue has given us a haunting and beautiful examination of childhood and the search for identity. And he has done so in humanity’s most enduring medium: that of myth.
Posted by Amanda at 8:00 AM