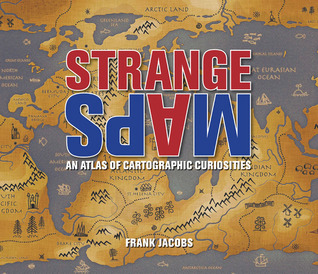 Strange Maps: An Atlas of Cartographic Curiosities
by Frank Jacobs

I love the look of maps, especially antique ones. They're so intricate and beautiful and exact. So naturally, this particular book really caught my interest. But what, exactly, is a strange map? Lots of things, really. Strange Maps started as a blog of the same name (<a href=http://bigthink.com/blogs/strange-maps>still going</a>, as it turns out) where Jacobs essentially posted any map that drew his attention and was out of the ordinary. This book is more than 100 of those maps, reproduced in full color and with a thorough explanation by Jacobs.

There's a huge variety here, everything from fictional lands to rejected border ideas to geographic oddities. I don't know if I'd call myself a map buff, but it was fascinating to me. Jacobs's commentaries were usually enlightening (he seems fairly knowledgeable, and he could point out some interesting details on the maps that I might have missed), though probably a pretty close match to what you could find on his blog. If you've been a regular reader of his blog, you probably won't get much extra out of the book version. But I'd never read his blog before, and don't think I'd even heard of it. I think I will be going through the archives now, though.

It isn't a perfect book, though. Not all of the maps are that interesting, and some of them are barely maps at all. And if I hadn't been taking my time and only reading one or two chapters at a sitting, I probably would have gotten bored of the maps eventually. That said, there were more than enough maps that were interesting enough for me to share, so I would say that this is worth a read, but only if you take it in chunks.