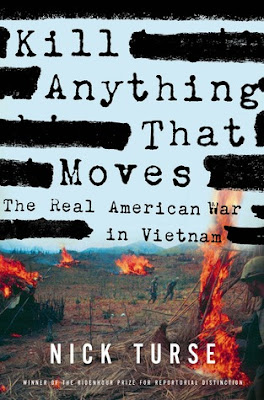 Kill Anything That Moves:  The Real American War in Vietnam
by Nick Turse
Published by Metropolitan books

In his famous chapter How to Tell a True War Story from the Vietnam classic The Things They Carried, Tim O'Brien says, "True war stories do not generalize. They do not indulge in abstraction or analysis. For example: War is hell. As a moral declaration the old truism seems perfectly true, and yet because it abstracts, because it generalizes, I can't believe it with my stomach. Nothing turns inside. It comes down to gut instinct. A true war story, if truly told, makes the stomach believe" (78).

Kill Anything That Moves is not a pleasure to read. It's not an entertainment. It's a rote account of atrocity after atrocity that gives names and faces to the abstraction created by numbers and statistics. And I felt it in my stomach with every turn of the page. This is war at its most foul, most hellish, most base and brutish. In other words, it's war without the veneer of romanticism; it's war that is not cloaked in nobility and honor and valor. It's about what men can and will do to a people they feel are inferior, labeled as "Other." It's an important book because it confronts us with the truth of what war is and the toll it takes on the land on which it's fought and its civilian populace. And it reminds us of the moral corrosion it sometimes inflicts upon the boys--little more than children--who fight it.

Countless novels and non-fictions have been written about the horror of the Vietnam War and the impact it had on a generation, and rightly so. It is important to acknowledge the service and sacrifice of those who fought, regardless of how one feels about the policies of the U.S. in Vietnam. However, those accounts have mostly focused on the American cost in the war. Turse's account is different in that its purpose is to explore the war atrocities committed by American forces as a result of military policies that reinforced a "kill anything that moves" mentality. The book also reveals that My Lai was not an aberration, but only seemed one after the military used intimidation and cover-ups to keep other atrocities quiet and out of the media. This was especially true of Operation Speedy Express in the Mekong Delta, which led to approximately 5,000 civilian deaths (250).

Because Vietnam was not traditional Western warfare where troops met on a battlefield, the notion of "body count" as a means of determining who was winning was instituted. The results were disastrous. War became a machine with a quantifiable output, leading to increasing pressure to produce high body counts as a sign of American victory. From this, the "Mere Gook Rule" mentality was born--if it's Vietnamese, it must be VC. Kill boards were sometimes erected, keeping tally of how many kills a unit had. Because troops were told that anyone who ran in the presence of U.S. military must be a VC and could therefore by justifiably killed as an enemy, civilians were often purposefully frightened so that they would run. Women, children, and old men who clearly were not enemies were tortured and killed with little or no effort given to ensuring they were, in fact, the enemy. Weapons were planted on some of the bodies so they could be called in as enemy kills. For example, Operation Speedy Express yielded results such as "During the week of April 19 . . . 699 guerillas had been added to the division's body count (at the cost of a single American life), but only nine weapons were captured" (250). Such discrepancies should have raised suspicions--and, in fact, often did--but the whistle blowers were often threatened into keeping quiet. Turse chronicles these harrowing events, both from the perspective of the Vietnamese survivors and from interviews conducted with American veterans.

Turse clearly points the finger of blame at a military establishment more concerned with sweeping everything under the rug than confronting the demons it created with its both spoken and unspoken policies. He's not without sympathy, however, on the part of the average soldier in Vietnam and he doesn't generalize. Not every American in Vietnam is portrayed as a ruthless killer. Many of the soldiers, fresh out of high school, were placed in a war where not knowing who the enemy was, seeing the gruesome and tragic deaths of their comrades, and spending endless days humping through the boonies while worrying about a seemingly phantom enemy created a sense of disorientation, fear, and anger. Combined with fear of retribution should they disobey orders, many would do as they were told without second guessing command. The book is also not without its heroes. Men like Jamie Henry, Ron Ridenhour, and the 100 Vietnam veterans who testified at the Winter Soldier Investigations refused to remain silent about what they had seen, and participated in (both willingly and unwillingly), in Vietnam. The Winter Soldier Investigations themselves "put the lie to any notion of bad apples and isolated incidents . . . the Winter Soldiers explicitly pointed to superior officers and command policies as the ultimate sources of the war crimes they had seen or committed" (239). It took tremendous courage to stand up to the military establishment and these men should be praised for their refusal to keep silent on behalf of a people who seemed a world away to the average American.

I'm not naive enough to think that war is completely unavoidable. However, books like Turse's remind us of what war really is and how it can warp the morality and finer points of human nature. It's also a reminder that when we send our men and women in uniform to fight on behalf of our country, we better make certain it is for a justifiable cause--because the costs are just too high and the sacrifice too great, for both sides, when it's not.
Posted by Amanda at 8:00 AM