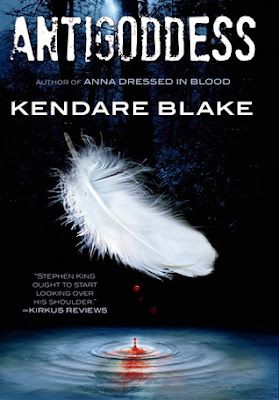 **I received a free copy of Antigoddess from Tor in exchange for an honest review.**

After centuries, the Twilight of the Gods has arrived.

Already fallen from Olympus, now more mortal than god, each deity is dying in a manner peculiar to their power. Athena, goddess of battle and intelligence, is being slowly suffocated by the feathers of her sacred bird, the owl. The feathers fill her lungs and sprout beneath her skin. While many of the gods are resigned to their demise and see their end as a final whim of Fate, Athena, along with the swift Hermes (who is being consumed by his own rapid metabolism), seeks the counsel of Demeter and finds that a war is brewing. Led by Hera, some gods are determined to survive--even if it means slaughtering their own kind. Their only hope? A teenage girl named Cassandra--no mere mortal, but the reincarnation of Cassandra of Troy, prophet, sister of Hector, and love of Apollo.

The first in a trilogy, Antigoddess (and let's just go ahead and get this out there--this is a baffling and terrible name for the book) is an entertaining, if uneven novel that is the latest offering in the young-adult-if-only-we-were-supernatural genre.

There's a lot here we've seen before: the co-dependent mortal/immortal love affair (it's always baffling to me when immortal creatures fall in love with nubile young teenagers; one would think the passing of centuries would make a relationship with anyone susceptible to Bieber-fever a tedious proposition at best), the requisite showdown at a house party, and the battle lines drawn between two supernatural armies whose collective fate rests on the shoulders of a human who is more than she appears to be. And while I know it will not bother the target audience, to have the gods appear as young adults is problematic to me. No explanation is given as to why they seem to be perpetually stuck in the Proactiv Skin Care years. In my imagination, Athena (my favorite goddess) has always loomed like an Amazon, tall, strong, mature. To think of her with tattooed wrists and purple streaks in her hair? Hermes sporting Hollister? Apollo in a hoodie? By Hades's balls, I'd rather French kiss Cerberus than think of the majesty of gods reduced to trendy mall fashion.

Buuuuttttt . . . having said all that, there's an undeniable charm to what Blake's peddling here and it's far more successful than the Percy Jackson series. Sure, the gods lack characterization, but haven't they always? And, sure, they sometimes behave like mortals, but that's always been part of their appeal. Treading like giants and with powers beyond human comprehension, they still fell prey to very human weaknesses: love, hubris, envy. Blake also knows her stuff and it's fun to see her weave the tale of Troy into a modern day setting as Hector, Andromache, Odysseus, and Circe's coven make appearances alongside Hera, Aphrodite, Poseidon, Artemis, and Apollo. Throw in a cyclops, a Nereid or two, and an author with a sharp sense of humor--well, you could find worse ways to spend a Saturday afternoon.
Posted by Amanda at 8:00 AM