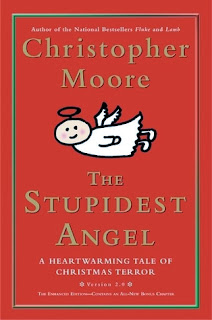 The Stupidest Angel: A Heartwarming Tale of Christmas Terror

'Twas the night (okay, more like the week) before Christmas, and all through the tiny community of Pine Cove, California, people are busy buying, wrapping, packing, and generally getting into the holiday spirit.

But not everybody is feeling the joy. Little Joshua Barker is in desperate need of a holiday miracle. No, he's not on his deathbed; no, his dog hasn't run away from home. But Josh is sure that he saw Santa take a shovel to the head, and now the seven-year-old has only one prayer: Please, Santa, come back from the dead.

But hold on! There's an angel waiting in the wings. (Wings, get it?) It's none other than the Archangel Raziel come to Earth seeking a small child with a wish that needs granting. Unfortunately, our angel's not sporting the brightest halo in the bunch, and before you can say "Kris Kringle," he's botched his sacred mission and sent the residents of Pine Cove headlong into Christmas chaos, culminating in the most hilarious and horrifying holiday party the town has ever seen.


This book is just what I needed. Slightly warped, totally funny and seasonal to boot! The characters are to die for, some literally and some by laughing to death. Like Moore's Lamb, this delivers and even in time for Christmas!

I was a little worried at first that we would be constantly confronted with a Clarence gone bad but the angel makes just the right amount of appearances and not ones you'd expect. They are just enough to keep the title legitimate but not enough for him to overshadow the other well crafted people of Pine Cove. All them being so wonderfully flawed.

I really wish I had the money to buy multiple copies of this and hand them to each person that says I need to watch A Wonderful Life to get in the spirit of Christmas. I much rather prefer to laugh than to cry during the holidays. Tis the season to be jolly!
Posted by Zorena Deckard at 10:00 AM