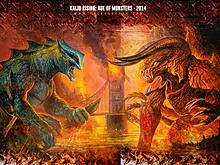 Today's guest is J.M. Martin, one of the head honchos at Ragnarok Publications as well as one of the masterminds behind Kaiju Rising, an anthology of giant monster tales.

You've had an interesting career. What was it like working with Caliber?
It was the most fun I’ve had working for someone. Publisher Gary Reed is a brilliant guy and about the coolest boss one could ask for. I don’t know how many times he bought dinner for me “just because.” And my co-workers were all incredibly cool people, too. We made comic books and toys for a living! It doesn’t get much better than that.

In the beginning we also shared space with Stabur Home Video, a well as McFarlane Toys’ satellite office in Michigan, so there were a couple dozen of us and our jobs crossed over with all three companies; in a typical day I’d sift through art submissions, make some calls, letter some comic pages, work on a video ad, design a logo, answer emails, do a Spawn® promotional piece of the McFarlane Collectors Club, and then at closing time we’d order pizza, Gary would make a beer run, and we’d fire up Age of Empires or Diablo over the network and go to war against one another until dark. We even had an annual softball team. There was great fun and great camaraderie.

Unfortunately, consolidation of the IADD (comic distribution market) put an end to those days, as Diamond bought out the competition and forced exclusivity contracts. Caliber got buried in the Previews catalog, then there was a printing fiasco with a collectible card game that resulted in the loss of huge P.O.’s from mass market retail chains, and basically a slow death ensued after that. Even winning a lawsuit against the printer did very little for us. Fortunately, in this new age of digital publishing and by farming out titles to other publishers, Gary’s been able to resurrect some of Caliber’s titles, so the company lives on in its own way.

What was it like working for Privateer during the d20 boom?
I met Matt Wilson at a comic con in Cincinnati in 1998. Back then he was wanting to get into comics and we agreed to have him do a cover for one of our fantasy titles called Legendlore that I wrote and Philippe Xavier drew. That never came about, but we stayed in touch sporadically over the next couple years. He called me one day around the winter of 2000 and made an offer to come aboard and be part of the Privateer inner circle. I eventually assumed the Managing Editor position and worked for Privateer for four years.

It started out great, lots of creative license and laughs and brainstorming and making cool stuff for gamers—I couldn’t tell you how many contributions I made to the company’s IP—but honestly Matt just went through a personality shift along the way and he became very unapproachable. He ended up driving everyone from the inner circle away—meaning Matt Staroscik, Mike McVey, Brian Snoddy, and myself—because we were the only ones who would still question his direction (I actually wanted to describe him as going “utterly bananas” but my wife said no). You could probably talk to Snoddy for a more interesting take. Anyhow, Privateer continues today thanks to the creations and labors of a lot of good folks who deserve credit and receive none. It’s unfortunate, but one must live and learn.

What's the story behind the formation of Ragnarok Publications?
After two very promising forays in publishing ended unhappily for me, I was pretty burned on publishing in general. I went back to school and became an Occupational Therapy Assistant and went to work in a skilled nursing facility for a while with disabled geriatric patients. That lasted about a year before I realized I needed to get back in publishing. It’s what I truly loved.

What's the story behind Kaiju Rising?
Nick Sharps has become a good friend via our interactions on Facebook, and one night after we had both seen Pacific Rim we started talking Kaiju and, basically, he mused how cool would a Kaiju-inspired anthology be? Nick’s mind works a mile a minute so he likely would have moved on to the next idea, but I told him— having just started up Ragnarok with Tim—that if he could get some actual authors on board, we’d do it. Nick took that as a challenge (don’t ever challenge him to do something unless you’re prepared to have it done) and he immediately went after Jeremy Robinson because he was such a fan of Project Nemesis. Jeremy was unable to fit a story into his schedule, but he did end up doing the foreword for us, plus he got his pal, author Kane Gilmour, aboard. The project snowballed from there as Nick hunted down every author he suspected was also a Kaiju fan and built a pretty impressive lineup.

Of course, we had zero budget for this thing, so Kickstarter became the logical choice. I built the campaign from the ground up, basically going with my gut and plying my Photoshop skills, and after it was over we’d achieved almost 186 percent of goal; some of the authors told us it was one of the best Kickstarter campaigns they’d seen. I laugh because I remember Gini Koch saying, “Gee, if you did that based on intuition alone, imagine what you could achieve if you actually knew what you were doing.”

What's your favorite giant monster story NOT in the book?
Does Mary Shelley’s Frankenstein count? Not giant enough? What about Frankenstein Conquers the World? Yeah, not a great one but as a kid I saw that and the concept stuck with me. I don’t think I’d watch it today. Might ruin my childhood.

As a teen I remember going to a friend’s house and we’d watch all kinds of Godzilla and other Kaiju movies while we played D&D. To be honest, I was always more drawn to the heroic giants like Frankenstein and the the large mechs like Ultraman and Jet Jaguar. That must be why I really dug Pacific Rim.

What else does Ragnarok Publications have in the pipeline?
Kaiju Rising fans will be pleased to know we have another anthology planned for late in the year tentatively called Mech: Age of Steel. It’s a follow up, or companion volume, to Kaiju Rising. We have some excellent commitments to it already, and that’s one where Nick has again handled the bulk of the acquisitions.

We also have a fantasy antho planned for this summer called Rogue: Assassins, Mercenaries, Thieves, with our lineup pretty much set for that. We’ll be announcing more details soon, but I can tell you that Mark Lawrence has already turned in a story that ties into his Broken Empire trilogy. We’re also doing this one as a co-publishing venture with Roger Bellini’s company, Neverland Books.

What author would you most like to work with for a future Ragnarok publication?
That’s a toughie because we already have so many great authors lined up, like Mercedes Yardley, who is amazing, and Kenny Soward, who is Master of Gnomes and writes epic fantasy, Seth Skorkowsky’s “Valducan” series is exciting, and recently we picked up Timothy Baker’s “Hungry Ghosts.” Ragnarok’s reputation is also growing and the word’s getting out about how author-friendly we are, so we’ve been able to attract traditionally-published authors like Django Wexler, too (and we’re speaking to another).

So, getting back to your question, I say ALL THE AUTHORS! Hah. For me, personally, I’d like to time travel a few years back and work with David Gemmell. He’s the author who has probably influenced me the most, other than my childhood idols of Tolkien, Edgar Rice Burroughs, Lloyd Alexander, and Stan “The Man” Lee.

As an editor, what advice would you give to fledgling writers?
Make your manuscripts lean and mean. Analyze every adverb. Don’t info dump. Show, don’t tell. Read lots. And remember to vary your sentence lengths. Good writing should flow and have a pleasing melody. Read your work aloud. And bear in mind, especially self-publishers, that a good editor is crucial. I think self-publishing is getting much better these days, though. The good stuff’s rising to the top.

Also, stay on target. If you’re going after a traditional publisher and/or agent, rejection is part and parcel. Don’t let it discourage you. Keep at it, and use social media to your advantage (without being a pest or a total weirdo stalker creeper).

When Kaiju Rising ushers in a giant monster renaissance and you are crowned emperor of the world, what city will bear your wrath first and with which giant monster?
As emperor, my first order of business would be to unleash the Stay-Puft Marshmallow Man on Mogadishu in Somalia. That place is a real mess and could use a nice slathering of confectionary retribution. Perhaps a massive blast of sugary corn syrup will defuse all the hardcore militants. I just want peace...and lots of candy. And I’m betting, deep down, that’s all they really want, too.
Posted by Dan Schwent at 12:00 AM