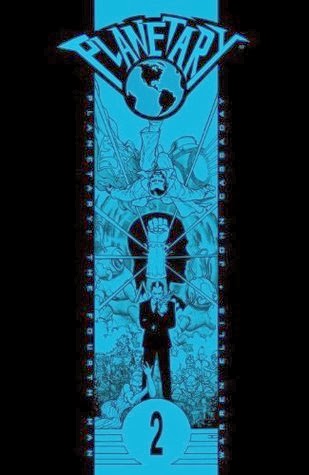 This volume of Planetary explores, and ultimately reveals, the secret of the mysterious Fourth Man of Planetary and also exposes the breathtaking scope and breadth of the crimes perpetrated by the Four upon the world in the name of their great game.

Issue 7 – “To be in England, in the Summertime”: Planetary attends the funeral of Jack Carter, the man everyone in the occult underworld was afraid of and owed favours to. Cute issue with plenty of nods to Alan Moore and the ‘dark and gritty’ world of magic and debased superheroes that the Vertigo line of comics, and esp. one of its hallmark titles “Hellblazer”, was known for. If you know the references you’ll get a chuckle, but otherwise a fairly unremarkable issue.

Issue 8 – “The Day the Earth Turned Slower”: Remember all of those crazy sci-fi B-movies from the olden days? Movies like “Them!”, “The Attack of the 50 ft. Woman”, and “The Incredible Shrinking Man”? What if they weren’t based on fiction? What if the government, or more accurately the Powers-that-Be, really did perform strange atomic experiments on animals and the wretched refuse of humanity that they deemed to be ‘unfit’ to live amongst right-thinking people? What if they created “Science Cities” in remote locations where these unfortunates could be put to ‘good use’, not in the name of building an army of super-soldiers or forwarding any grand plan, but simply because they could, merely to throw some science against the wall and see what sticks? Planetary's about to find out.

Issue 9 – “Planet Fiction”: This one is a flashback story where Ellis goes down a pretty weird rabbit hole. If comics look to fiction for many of their ideas for super-science why not blend fiction itself with scientific experimentation, really break the fourth wall? Why not create a "pretend" fictional world within your "real" fictional world of the comic book and then have an evil genius send a team of "fictionauts" inside it? What do you do if something comes back with them? This issue also deepens the mystery of the Fourth Man and introduces us to Ambrose Chase, the Third Man of the Planetary field team prior to the recruitment of Elijah Snow. He's a badass operator with a reality distortion field that allows him to speed up or slow down time and generally alter the physical laws in his close proximity. Think Neo from the Matrix with a brain.

Issue 10 – “Magic & Loss”: Planetary have set up a ‘dig’ in the laboratory of the Four that they found in issue 6. Their findings are not encouraging in what it reveals about the agenda and methodology of the Four. In going through some of the artefacts that are stored there we begin to glimpse the extent to which the Four have been able to control what has occurred on the planet and their utter ruthlessness in doing so. Think of the impact that three of the greatest heroes in the pantheon of comics: Superman, Green Lantern, and Wonder Woman have had on their fictional worlds. They are three whose power and outlook might have allowed them to save the world. What happens if the Four find them first?

Issue 11 – “Cold World”: Elijah’s suspicions about the actions and motivations of his colleagues grow, as does his concern with his spotty memory, so he decides to pay a call on an old friend for some advice and information. John Stone, agent of S.T.O.R.M., is the world’s greatest secret agent and if anyone can help Snow figure out who he is and what secret agenda the Four may have it’s got to be him. Memories are shaken loose and suspicions confirmed as Elijah tries to untangle the truth from the lies in the strange world he is uncovering.

Issue 12 – “Memory Cloud”: Snow confronts his Planetary colleagues with the results of his personal investigations and as his cloudy memory slowly comes back to him he reveals some of the secrets of his long life that others had wished would remain hidden. The Fourth man is revealed and a challenge is finally issued to the apparently unassailable Four in the names of all of their many victims.

All in all this was a very good volume in the continuing story of Planetary. Some of the one-off adventures were a bit weak, but the overall story arc shaped up very nicely as secrets and revelations about both Planetary and the Four are brought forward and the glimpses of the wider universe Ellis has created are tantalizing and a heck of a lot of fun. The gauntlet has been thrown and now things promise to gain momentum with every step. Lots of fun!

Also posted at Goodreads
Posted by Terry at 12:39 PM