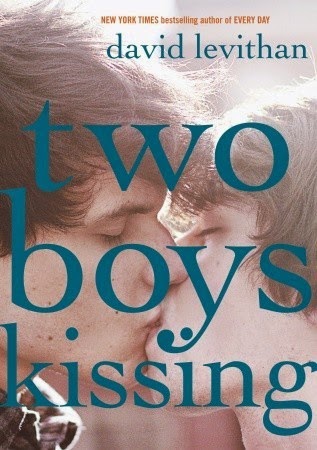 
New York Times bestselling author David Levithan tells the based-on-true-events story of Harry and Craig, two 17-year-olds who are about to take part in a 32-hour marathon of kissing to set a new Guinness World Record—all of which is narrated by a Greek Chorus of the generation of gay men lost to AIDS.

While the two increasingly dehydrated and sleep-deprived boys are locking lips, they become a focal point in the lives of other teen boys dealing with languishing long-term relationships, coming out, navigating gender identity, and falling deeper into the digital rabbit hole of gay hookup sites—all while the kissing former couple tries to figure out their own feelings for each other.

Don’t let the provocative cover stop you from picking up this book. It is about two boys, Craig and Harry, who are still good friends, but no longer together, locking lips to break the world’s record for the longest kiss.


Enough time had gone by that when they started kissing again, the electricity was gone, replaced by something closer to architecture. They were kissing with a purpose, but the purpose wasn’t them; it was the kiss itself. They weren’t using the kiss to keep their love alive, but were using their friendship to keep the kiss alive. First for minutes. Then for hours.


Peter and Neil are an established couple whose kisses may not be nearly as intense, but are no less meaningful.


Nobody is watching as Peter and Neil kiss. It is just a quick kiss as they leave the IHOP, before they head home. It is a syrupy kiss, a buttery kiss. It is a kiss with nothing to prove. They don’t worry about who might see, who might pass by. They’re not thinking about anyone but themselves, and even that feels like an afterthought. It is just a part of who they are together, something that they do.


Avery, the boy with pink hair who the world thinks is a girl, and Ryan, are dealing with the anxiety that is common in all new relationships.


Cooper is not in a relationship at all. He struggles with his loneliness, spending time on his computer texting strangers and having difficulty with parents who cannot accept him as he is.


His mind is on fire now, and it will be hours until it cools itself back into the right temperature for sleep. He is angry at his father, angry at his mother, but mostly he’s come to feel that all this was inevitable, that he was born to be a boy who must sleep in his car, that there was no way he was going to make it through high school without being caught. He feels he’s been soured by his own desires, squandered by his own impulses. He despises himself, and that is the flame that sets his mind on fire.


Even though this was a fast and easy read, this is a powerful, moving, beautiful story that should be read by everyone. It deals with the past and present. It explores the lives, loves and struggles of a group of teenagers. It shows that as cruel and mean-spirited as people can be, they can also be kind, supportive and generous.

I’ll admit I was reluctant to read this book because of the unusual narration. Told by the voices of men who lost their lives to AIDS, I saw my friend Mark’s ghost among them, observing the lives of boys who share some similarities but in many ways are living a very different kind of life than he was.


We did not have the Internet, but we had a network. We did not have websites, but we had sites where we wove our web. You could see it most in the cities. Even someone as young as Cooper, as young as Tariq, could find it. Piers and coffee shops. Sports in the park, and bookstores where Wilde, Whitman, and Baldwin reigned as bastard kings. These were the safe harbors, even when we feared that being too open meant we were opening ourselves to attack. Our happiness had defiance, and our happiness had fear. Sometimes there was anonymity, and sometimes you were surrounded by friends and friends of friends. Either way, you were connected. By your desires. By your defiance. By the simple, complicated fact of who you were.


Mark would have been ecstatic that gays now have the right to marry in more than 30 states, but he would have lamented the loss of all the clubs and bookstores that closed once Internet changed the world. He worked in the computer industry and would have adapted, though. He would have embraced the chat sites and discovered that his social life would be as active as it was when he was frequenting the clubs. The easy access to all kinds of books, more than the stores ever stocked, would have made him happy too. He probably would have even stopped subscribing to those porny magazines I had to pick up from all over the apartment just before my mom dropped by.

Minor complaints aside, I am sad that Mark died so young and missed so much. He was always out and proud, but even he would have appreciated how far we’ve come in spite of all the problems that still exist.

He would have loved this book. Even though it made me cry, it touched me deeply. It is full of love, hope and wisdom. As soon as I return the book to the library, I’m going to buy copies to push on other people.

Also posted at Goodreads
Posted by Nancy at 12:23 PM