Time Keeps On Slipping Into the Future 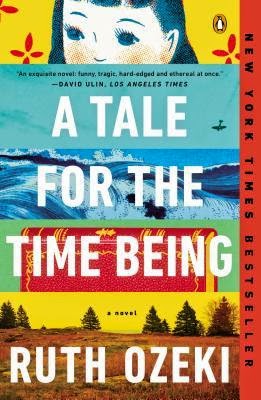 You know that experience when you learn something new and only a few days later, references to it start popping up in the most unexpected of places: a television program, a book you're reading, a song on the radio, a friend mentions it in conversation? It's like the universe made certain you knew about this fact or concept because there was fixing to be a pop quiz over it and you needed to be ready. It's these types of connections and coincidences that make up A Tale for the Time Being. While it at first seems as though the novel is filled with sometimes irrelevant facts and digressions, just hang in there--Ruth Ozeki weaves them all together in a tale that serves as a metaphor for how writing and reading, or the interaction between writer and reader, can help us see ourselves in the life of another and ultimately save us from isolation and existential angst.

A Tale for the Time Being alternates between two women who, at first, seem very different: Ruth, a writer living on a small Canadian island, and Nao, a teenager living in Japan. When Ruth finds Nao's diary in a Hello Kitty lunchbox, their worlds defy time and space to collide in unexpected ways. The diary, however, is far more serious and sophisticated than its cartoonish packaging might lead one to believe. Written inside of a "hacked" copy of Proust's À la recherche du temps perdu (Nao purchases it in a craft shop in Tokyo that takes old books, guts them, and inserts new paper), Nao directly addresses her unknown reader as one would a close confidant and introduces herself as a time being, one who is aware of and chooses to exist in every moment in time, though it is becoming more and more difficult for her to do so. While reading the diary, Ruth becomes obsessed with finding the girl--at first for fear that Nao may have been a victim of the 2011 tsunami, but later for fear that she is a danger to herself. The diary allows us to experience Nao's unique voice as she relates her inability to fit into her new culture, her father's descent into depression after losing his job in the U.S., and the brutal, horrific bullying she endures at the hands of her classmates and teachers. As her diary goes on, the faux title begins to prove true: Nao is becoming more lost as time goes on.

As Ruth reads the diary and desperately searches for Nao, we learn about her life as well and find that the two women overlap in surprising ways: both are Japanese-Americans, both are transplants to a place and culture not their own, both have somewhat strained relationships with the men in their lives, both have strong connections to a revered female elder, both feel a failed sense to accomplish what they want in their writing, both have an expatriate's experience of 9/11, both worry about losing time. Nao's name often functions as a pun on the word "Now," leading to overlapping meanings as to what both Ruth and Nao, feeling stuck in time, may really be searching for--hope for a "now" in which they can fully exist without being immobilized by fear, worry, or sorrow.

While I enjoyed the book, I can't say that I loved it. Ozeki's meditations on time and existence are beautifully rendered, but sometimes difficult to understand as they rely upon the reader to retain information from previous chapters when they are echoed in later events. There is so much here and so much that I don't fully comprehend. For not only is this a story about relationships, but it's also one about the concept of time, especially as it relates to zen and quantum physics. Ozeki plays with the idea of parallel universes, of time and existence as nonlinear. While I was able to keep up with the general idea, I still feel like there's a whole layer of meaning that I kept grasping for without success. This is a book that I think I could really love upon a second or third reading as I think more and more tumblers would fall into place and allow me to really unlock the full depth of meaning here.

Surprisingly, though, I had the opposite reaction to many readers in that I often found the Ruth chapters more compelling than the Nao chapters. Nao's diary doesn't really read like a diary; instead it reads like a first person narrative. And, yeah, okay, a diary is a first person narrative, but it usually doesn't read like a novel as it's more bare bones in terms of physical details, focusing more on the emotional inner life of its writer. Nao's voice also reads more like that of an adult; for a teenager, she is very precocious and while the details of her life as an adolescent are rendered authentically, she herself doesn't sound much like a teen. In Ruth, Ozeki excels at capturing the subtle seismic shifts in a marriage and, if one pays close attention, there's much about Ruth that makes her the perfect recipient for Nao's diary. I also enjoyed the tension created by whether or not Ruth will be successful in her search for Nao--especially since the Nao she is looking for is one of the past and may or may not exist in the present, regardless of whether or not she can be physically found.
Posted by Amanda at 10:55 AM