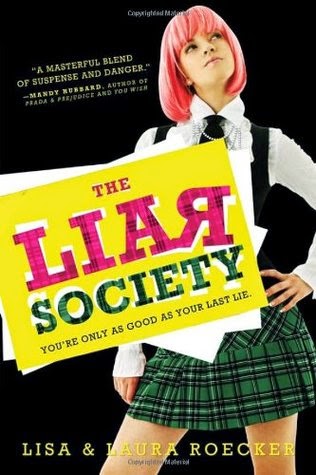 The Liar Society
by Lisa Roecker

Kate Lowry didn't think dead best friends could send e-mails. But when she gets an e-mail from Grace, she’s not so sure.

Now Kate has no choice but to prove once and for all that Grace’s death was more than just a tragic accident. But secrets haunt the halls of her elite private school. Secrets people will do anything to protect. Even if it means getting rid of the girl trying to solve a murder...

I liked the idea of a mystery set at an exclusive prep school. And it starts off strong, with an email from a dead friend. But it kind of stagnates after that.

The biggest stumbling block is our protagonist, Kate. Despite narrating the entire book, she never really emerges as more than a sketch of a character. Neither does anyone else, really. Worse, most of her girl detective stuff comes from being directed to specific places at specific times by the mysterious person emailing her from her dead friend's account. Which, incidentally, she never really considers might be anyone but, something I had a really hard time swallowing from a character of her age. It should have been her theory all along.

Like I said, the other characters are flat and interesting as cardboard. I only kept reading to find out what happened in the end. And I was disappointed. There's a lack of resolution that's really unsatisfying. The basic idea isn't bad, but it needed more interesting characters, a protagonist who doesn't need quite so much nudging, and a more satisfying ending.
Posted by Sesana at 12:00 AM