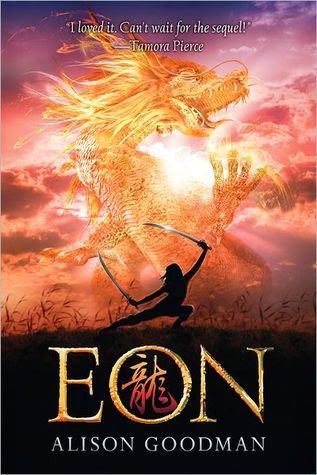 Sixteen-year-old Eon has a dream, and a mission. For years, he’s been studying sword-work and magic, toward one end. He and his master hope that he will be chosen as a Dragoneye—an apprentice to one of the twelve energy dragons of good fortune.

But Eon has a dangerous secret. He is actually Eona, a sixteen-year-old girl who has been masquerading as a twelve-year-old boy. Females are forbidden to use Dragon Magic; if anyone discovers she has been hiding in plain sight, her death is assured.

When Eon’s secret threatens to come to light, she and her allies are plunged into grave danger and a deadly struggle for the Imperial throne. Eon must find the strength and inner power to battle those who want to take her magic... and her life.

Eon is a sort of cousin of Tamora Pierce's Alanna: a girl disguising herself as a boy to, in a nutshell, kick ass and take names. No, Eon/a is not quite the woman Alanna is, but that's a really, really high bar to set. She has earned her place in that category of badass YA heroines, though.

Eon is, in many ways, about gender. The world of Eon, heavily Asian-influenced, is a profoundly misogynistic one: men hold all the power, and women are completely devalued. Which makes Eona's ruse, disguising herself as a boy to gain the power of a dragon, a very dangerous one. The plot of the book is essentially about Eona learning to recognize her own power and ability as a woman, a power that she doesn't have to borrow from a man. It's significant to me that the female power in this book is one of rage, not the more stereotypical nurturing energy I'd more than half expected to see. Eona can only be powerful as a woman, and she's damned powerful.

Another positive: the wonderful Lady Dela. Dela was by far my favorite character, bright, witty, and very capable in her role as courtier. And a transwoman whose gender identity really isn't a big deal. Eon asks her a few, respectful questions, and that's it. She thinks of her as a woman consistently and without any particular drama. It is really, really cool to have a trans character in a YA novel, or any novel, really, without that character's gender being an issue. That isn't to say that Dela is entirely free or prejudice, just that her gender identity isn't an issue for her or Eon, simply a detail of her character. Let me be clear, I would love Dela in any event for her personality, because she's awesome. But she's also an important character, in a real world sense.

For me, what is meant to be the big twist was telegraphed very, very early on. <spoiler>I realized almost immediately that the Mirror Dragon had to be female, and that her absence was because of the way women were excluded from the Dragoneye cycle.</spoiler> I was surprised with how little I was irritated with Eona for lagging so far behind me. But it's very easy to see why she's unable to see what's so obvious to me, a reader who hasn't been immersed in her culture. <spoiler>From birth, it's been drilled into her that female, Moon energy is weak and unwelcome, so it makes sense that she'd be blind to that power even when it's right in front of her.</spoiler> But this will probably annoy the crap out of some people who will just want to slap some sense into her. I don't judge.

I was very uncomfortable with how quickly the threat of rape shows up, as soon it's feasible. And Eona's relationship with her mentor becomes increasingly creepy, in many ways, which is never really dealt with. I very much could have done without the rape threats and creeping, thanks.

The world building seemed to be really good when I was reading the book. It was only after I finished that I realized that I still didn't understand much of what the dragon magic did. I guess that's what the second book is for. This one doesn't really end on a cliffhanger, but the story is obviously far from over. Not a bad way to end the first book, actually.
Posted by Sesana at 12:07 AM