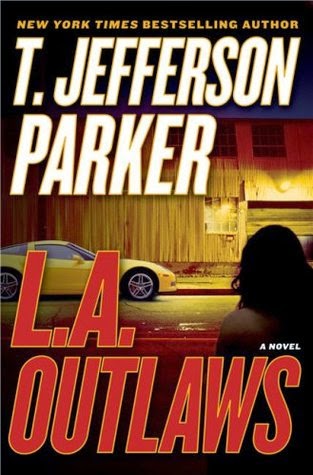 In this excellent introduction to his Charlie Hood series, T. Jefferson Parker creates two very memorable and intriguing characters. The first is the protagonist, Charlie Hood, a veteran of the war in Iraq who is now an L.A. County Sheriff's deputy. The second is Allison Murrieta, who claims to directly descended from the famous California outlaw, Joaquin Murrieta, who was shot and beheaded in 1853. The original Murrieta was famous, or infamous, enough that his head was preserved in a jar of alcohol and sent on tour.

No one knows exactly what might have become of this gruesome token; some say it was lost in the great San Francisco earthquake of 1906, but Allison claims to have it hidden in her barn, along with some other keepsakes of Joaquin's. More important, Allison has now picked up Joaquin's mantle, and in a wig and mask has set out on a crime spree that involves boosting cars (Allison is a real gearhead) and robbing fast food joints.

Allison donates a fair share of her proceeds to various local charities, including one run by the L.A.P.D. The cops are not amused, but in this media-besotted age, Allison becomes a folk hero and a local celebrity. Then she tumbles to a score in which a local diamond dealer is planning to pay off a loan to some gangsters with $450,000 worth of diamonds. The street value would be around forty-five grand and so Allison sets up to take off the dealer. But she arrives late to the scene and finds ten men dead in the building where the exchange was to be made.

She also finds the diamonds, gathers them up and is screaming away from the scene in a yellow Corvette Z06-505, when Deputy Charlie Hood pulls her over. By now, Allison has ditched her disguise and the diamonds are out of sight. Hood demands to see her license which reveals Allison to be Suzanne Jones, a mild-mannered eighth-grade history teacher. Suzanne comes up clean on the computer and claims to have been in the area visiting a relative and so Hood lets her go. But as he does, a very bad man named Luperico, who is also looking for the diamonds, drives by and gets a very good look at Allison/Suzanne.

And with that, the story is off and running. Suzanne is drop-dead gorgeous, very smart and a woman who's not about to let anyone stand in the way of what she wants. Hood is smitten immediately, and the attraction is mutual. But when Hood discovers the ten bodies almost immediately after he lets Suzanne go on her way, he can't help but wonder if she might have been involved in the shoot-out.

Because he discovered the bodies, Hood is temporarily promoted to the Homicide team that is investigating the killings and he and Suzanne begin a delicate dance as Hood becomes increasingly suspicious and begins to put two and two together. In the meantime, Luperico is hot on Suzanne's trail and seems to be almost clairvoyant in knowing where she's going to be at any given time. He's determined not to stop until he recovers the diamonds, no matter how much blood might be shed along the way.

All in all, it's a great ride. T. Jefferson Parker has written any number of outstanding books and this perhaps his best since Silent Joe, which was nominated for the Edgar Award for Best Novel. It's fast-paced, deftly plotted, both funny and bittersweet, and populated with a great cast of characters. It's a winner all the way around.
Posted by James L. Thane at 2:22 PM