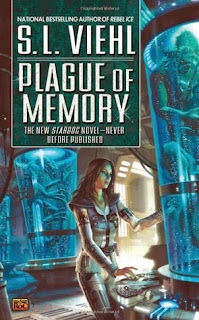 S.L. Viehl
Roc Books
3 out of 5 stars
Reviewed by Nancy


Dr. Cherijo Torin is not herself. With no memory of her past-or even of the man she loved-she sees herself as a different person and has no desire to remember who she once was. But Cherijo must remember if she's to develop a cure for the Hsktskt plague before their race becomes extinct.

After the disappointing Rebel Ice, I was hesitant to continue with the Stardoc series. In Rebel Ice, Dr. Cherijo Torin crash landed on the icy planet of Akkabarr, where she lost her memories but retained her medical skills. When her husband finds her, she is now Jarn, with a completely different personality and no recognition of her husband and daughter.

In Plague of Memory, the medical expertise of Dr. Cherijo Torin is needed to stop a plague that is causing large numbers of the Hsktskt (a brutal race of reptilian slavers) population to suffer mental delusions resulting in violence to self and others.

With the help of her husband, Duncan Reever, who is able to communicate and share memories with her telepathically, and her surrogate mother, Maggie, who imprints Cherijo’s memories in Jarn’s mind, Cherijo has now become an integrated Cherijo/Jarn which is a vast improvement over Jarn in the previous book.

All in all, Plague of Memory was a fast-paced, entertaining story. I enjoyed revisiting some old favorites, particularly Squilyp, the Senior Healer and his mate, Garphawayn, who was more developed in this installment. I also enjoyed the developing friendship between Cherijo/Jarn’s daughter, Marel, and the son of Tss-Var, the new Hsktskt leader. I was sad that the story’s minor gay characters, Qonja and Hawk, were “repudiated” from the Jorenian clan because of its strict pro-natalist policies. I hope they fare better in the next book.
Posted by Nancy at 6:00 AM