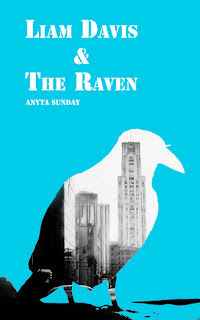 Liam Davis is a serious journalist, and he’s good at it.

Or at least, he was. Until the chief of Scribe, the campus magazine, makes him give up his politics column to write for the party page—the party page that is problematic for two reasons: One, it threatens Liam’s chance of getting the traineeship with his apathetic father at his prestigious newspaper company, and two, he has no idea what it means to party, let alone how to capture this new audience’s attention!

But Liam Davis is no quitter. He’s determined to prove to his father, the chief, and above all himself that he can do it—and do it well.

Life doesn’t make it easy. Not when Freddy Krueger comes stalking out of the shadows to attack him. Luckily the Raven, the campus vigilante—the vigilante getting hate mail sent to Scribe’s opinions page—comes to his rescue.

Now, between finding the perfect angle for his party page columns and making friends (and perhaps something more?), Liam needs to find this mysterious Raven—not only to thank him, but to warn him to watch his back.


Liam Davis is a student journalist writing for the campus magazine, hoping to gain apprenticeship at his father’s firm. In order for him to accomplish that, he needs to hold an editorial position for two years. He works hard and believes the features editor position is a possibility in the very near future, but Chief Benedict wants the students to be challenged. So he reassigns everyone to different positions. To Liam’s consternation, he is asked to write the party page. For lots of reasons, this really sucks. Liam is not a partier, he has no friends outside of work, and his life is solely devoted to studies.

If this story were told from any other perspective than Liam’s own, I might have found it difficult to finish. Even still, he was a difficult character and it took some time for me to warm up to him. As a journalist, Liam’s skills of observation are well honed. His social skills, however, need some work. Thankfully, the party page provides Liam with the opportunity to make some new friends and learn who the Raven is.

Liam is blunt and insensitive at times. He also seems incapable of expressing emotion or responding to others’ feelings. It’s awkward and frustrating at first, but I really enjoyed watching Liam slowly come out of his shell and gradually become a character I could empathize with. Liam’s character is well balanced by those of his new friends. There’s Quinn, his roommate, and his close friend, Shannon. There’s also Hunter, amateur photographer, and partially paralyzed after a brutal gay bashing incident. Liam’s two rivals at work, Jack and Jill, make his life difficult, as does his distant father.

These are very real, engaging characters that I enjoyed spending time with. The mystery surrounding Liam’s attacker and rescuer was light and clever, with a few surprises. This is a thoughtful, humorous and entertaining story that made me smile.
Posted by Nancy at 9:33 AM