Thinner by Richard Bachman
My rating: 5 of 5 stars

“Some guys-- a lot of guys---don't believe what they are seeing, especially if it gets in the way of what they eat or drink or think or believe. Me, I don't believe in God. But if I saw him, I would. I wouldn't just go around saying 'Jesus, that was a great special effect.' The definition of an asshole is a guy who doesn't believe what he's seeing. And you can quote me.”
Richie “The Hammer” Ginelli 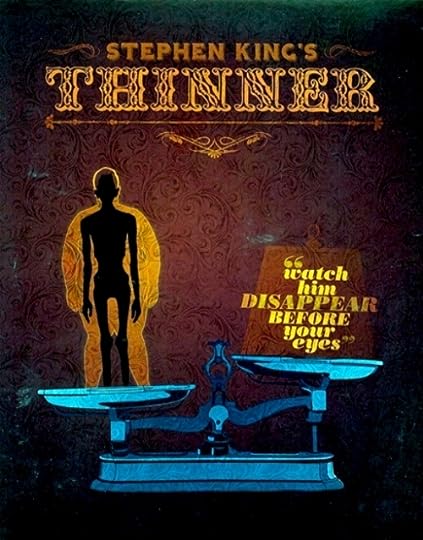 William Halleck is a damn fine lawyer, a rising star in his firm, and well liked by judges and police officers. His life was coming together nicely and without too much extrapolation he could probably anticipate the continuing arc of his success. There was really only one thing that he was fighting against on a daily basis...his weight. The scales were not his friend. He was a stress eater, a man who would rather have two Big Macs peeking out of their wrappers than the goosepimple naked Coors Twins cooing his name.

He is 6’4” and weighs 251 pounds, which isn’t exactly fat if you are a professional football player bristling with heavy musculature, but if you are a white collar worker who doesn’t exercise and eats high calorie, high carb meals from breakfast until bed, the weight gain is going to settle right around your bread basket. I’m 6’4” and weigh 200-205. If I were to put on 50 pounds, I would be obese according to all the BMI charts. Given the fact that I’m retired from any form of athletics except shooting a few hoops in the driveway and going for walks, that 50 pounds would be the worst kind of weight gain, and I would be looking for new pants several sizes larger. Some reviewers/readers have questioned whether Halleck at 6’4” and 251 pounds was actually obese, which might say something about the current state of the American waistline. A nation floating down the river deNILE.

Halleck was a chubby checker, unable to see his feet when he was standing upright on a scale. Pissing was simply an act of faith because for Halleck to see willie perform, he would need to put mirrored tiles on his bathroom floor and walls.

Libido is usually the first to go when people become overweight. Their desires and lusts are exchanged for french fries, strawberry pie, and milkshakes, but Halleck didn’t have that problem. In fact, at the moment that his life was about to go off course, he was almost ready to cross off a bucket list item right up until the time he…

hit a woman with his car.

His wife, Heidi, out of the wild blue decides to be spontaneous. She’s not a prude, but she has never given any indication that she was uninhibited enough to go searching for Billy’s fishing tackle while he was steering a moving vehicle.

Now, he didn’t just hit any woman. Oh no, to completely screw up your life you have to hit a gypsy with a vengeful father. Taduz Lemke is a gypsy patriarch who might be anywhere between 106-120 years old. He knows things that the rest of the world has forgotten. 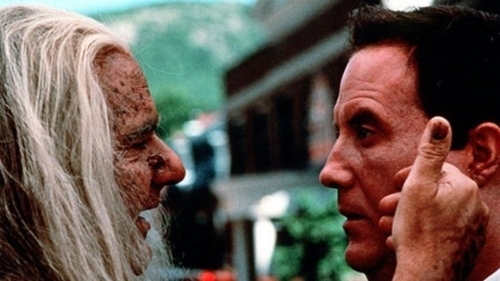 When he touches Halleck’s cheek and whispers the word…thinner, William starts to lose weight at an alarming rate.

He has been cursed, not just cursed, but gypsy cursed.

“You were starting to sound a little like a Stephen King novel for a while there.”

Wait, what was that about Stephen King?

Back in the late 1970s and through the mid-1980s, Stephen King was writing more books than could be published. In those days publishers believed that an author could only publish one book a year successfully. King decided to create a pseudonym as Richard Bachman so he could publish more than just one book a year. He was also having doubts about his own success. Had he just gotten lucky? Could he produce a best selling book without Stephen King emblazoned on the cover? The Bachman books were doing ok, but they did a lot better after a bookseller named Steve Brown in Washington D.C. thought the style shown by Bachman was very similar to the writing style of Stephen King. 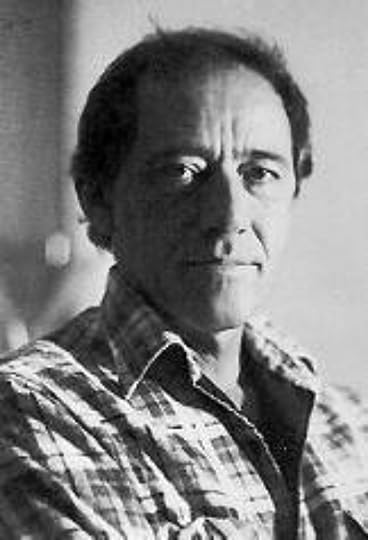 Meet Mr. Richard Bachman. The actual subject of the photo is Richard Manuel, the insurance agent of Kirby McCauley, who was King's literary agent.

The truth was out, and Thinner became a bestseller. Brown showed a lot of class. He went to the publisher first to show what he had discovered and asked what he should do. King called him and asked him if he would like to do an interview to tell the world how he made his discovery. For those interested, here is a link to Brown’s discussion of the discovery: http://www.liljas-library.com/bachman...

So the reference to himself that he put in Thinner was a tongue in cheek, knee slapping moment of poking fun at himself. 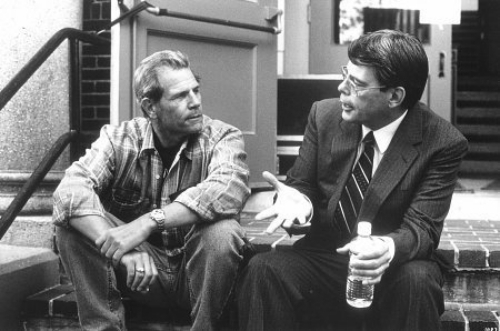 Stephen King and Tom Holland (director of the film) on the set. King had a cameo role as Dr. Banger.

Halleck is now losing two to three pounds a day, and that is with eating as much food as he can stuff into his stomach. He is desperately searching for the gypsy caravan so he can convince the prehistoric gypsy to take the curse off, but the flame of vengeance still burns in the heart and soul of Taduz Lemke.

He is going to need some convincing.

Richie “The Hammer” Ginelli, an Italian mobster whom Halleck helped defend in court, is a man with a code regarding helping friends in need. Out of all the people Halleck has tried to explain his situation to Ginelli is the only one who believes him.

Ginelli is a terrific character. He is certainly someone you will not forget. I thought that Stephen King, erhh Richard Bachman, put real flesh on the bones of all the characters. The plot is taut like a quarter bouncing off a nubile bottom and crackles like a corn crib on fire. In my opinion, one of the best Stephen King, erhhh Richard Bachman, books I’ve ever read.