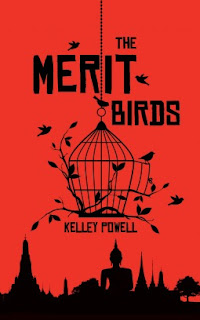 Eighteen-year-old Cam Scott is angry. He s angry about his absent dad, he s angry about being angry, and he s angry that he has had to give up his Ottawa basketball team to follow his mom to her new job in Vientiane, Laos. However, Cam s anger begins to melt under the Southeast Asian sun as he finds friendship with his neighbour, Somchai, and gradually falls in love with Nok, who teaches him about building merit, or karma, by doing good deeds, such as purchasing caged merit birds.
Tragedy strikes and Cam finds himself falsely accused of a crime. His freedom depends on a person he s never met. A person who knows that the only way to restore his merit is to confess. "The Merit Birds" blends action, suspense, and humour in a far-off land where things seem so different, yet deep down are so much the same.

I read this book while on vacation in Puerto Rico, so it was very easy for me to get accustomed to the tropical climate of Vientiane, Laos and get absorbed by the foreign setting and cast of compelling characters.

There was Cam, an 18-year-old Canadian who is angry about his mother’s decision to change jobs and live in Laos for a year. There was Somchai, Cam’s neighbor and first friend in Laos. There was Nok, a masseuse struggling to support herself and her brother, Seng, while gradually developing a friendship with Cam, who is one of her clients. There was Seng, a street vendor who desperately wants to go to America.

This is Cam’s story. While we get his perspective of events, we also get a glimpse of Laos and its inhabitants through the eyes of the secondary characters. There is beauty and warmth, but also incredible pain and hardship.

As Cam grows more accustomed to his environment and his life becomes intertwined with those of Somchai, Nok, and Seng, he begins to mature, even as a tragic event complicates all their lives.

This is a lovely, descriptive story about the importance of family, friendship and community that starts at a leisurely pace, picks up speed toward the conclusion, and ends on a satisfying note.