The Journey of Crazy Horse

The Journey of Crazy Horse: A Lakota History by Joseph M. Marshall III
Reviewed by Jason Koivu
My rating: 4 of 5 stars

You read or hear about Gen. George Custer and think, "oh I know all about Little Big Horn, Sitting Bull and Crazy Horse" but upon reflection you realize you do not know a damn thing about the Native American side of things...and then you go and do something about that. 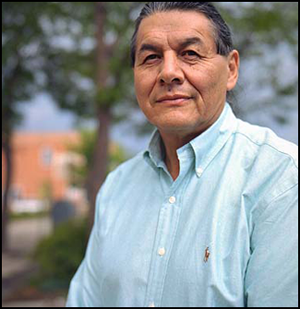 The name doesn't sound very "Native American," but Marshall is about as close as you'll get these days. According to his Wiki page he speaks Lakota and "can craft a Lakota bow in the traditional style. He was on the founding board of the tribal college, Sinte Gleska University, on the Rosebud Indian Reservation. Joseph is an enrolled member of the Sicangu Lakota of the Rosebud Sioux Tribe. Joseph grew up in Horse Creek Community near White River (Maka Izita Wakpa, Smoking Earth River) on the Rosebud Indian Reservation in South Dakota."

He is Lakota. He studies and teaches the Lakota ways and history. What better person to tell you about one of the Lakota's greatest heroic figures of all time?

Marshall's The Journey of Crazy Horse gives the reader more of an insight into the true daily life of this northern plains tribe than most depictions of Native Americans often receive.

How do we know this is true? Granted, much of this is taken from oral history, since written accounts of Crazy Horse have mainly been from whites, soldiers, boastful victors and the sour defeated (funny how the US Army named their loses as "massacres" back then, isn't it? Makes it sound like they were blind-sided in a unfair fight).

I'm on the side of Native Americans and their gripes about the Europeans that took their lands. If there's anyone in America with the right to complain about illegal aliens it's these guys. However, I'm not a fan of whiny losers. You fought, you lost, the victor gets your shit. That's the way war works. Were the Americans underhanded in their dealings with the Native Americans? Hell yes. Did the Romans treat the Celts kindly or did they hunt down their leaders and holy men and stamp out their culture? Did one tribe wipe out another? When they had the chance. It's the way of conquerors. Much of human history is about war. Just think about what gets recorded and retaught, the battles or the times when blood-shed was avoided? History bluffs are more apt to read/write about the strategies at Waterloo rather than poring over the notes and lab hours of Louis Pasteur. To this point, we've been a war-like people. Expect it. Don't be surprised and shocked by its disgusting ways when it shows up upon your doorstep. My point is, I have a low threshold for listening to or reading "woe is us" laments from the losing side. Genocide of a peaceful people is one thing. They can righteously complain all they want and have my heart and ear the whole way through. But a people that pride themselves upon their fighting prowess, and the Lakota certainly did, get a little less sympathy from me.

So, with that rather long harangue in mind, I'm happy to say Marshall's The Journey of Crazy Horse does not go overboard with the laments. Yes, there is sorrow for the tribe and hatred for the whites, which I suppose some with a lower threshold for complaints might balk at, but I didn't have a problem with it. I've seen worse. 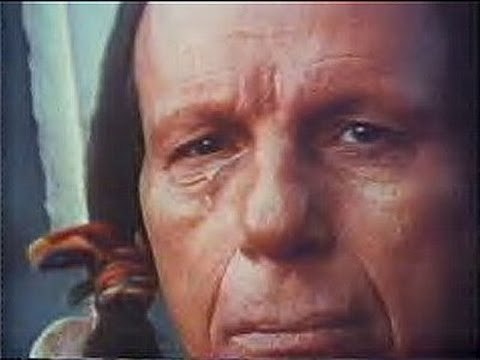 (From a '70s anti-pollution campaign. Which bothers me, because the Native Americans were some of the worst polluters. Look into the heaping midden piles they left behind. Again, I'm on their side. I'm glad there are anti-pollution campaigns, but let's have some perspective...and less misguided melodrama, please.)

As far as biographies go, this sets a good tone and pace, and it's the perfect length. I sensed that creeping feeling of boredom I get with a book that's pushing it's interest-limits coming along just as it ended. It's a tough subject to tackle. It's so much easier to research written histories from a people long-versed in writing things down. The Lakota were not that kind of people. However, they did have a long and rich oral history from which Marshall has crafted a fine biography upon a figure that would be intriguing no matter what people Crazy Horse came from.