A Time to Rise 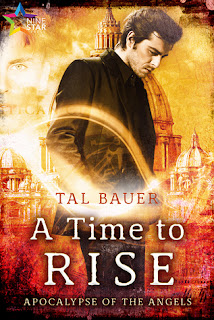 History says the Knights Templar were destroyed in 1307.

Vampires haunt the sewers beneath Rome, revenants desecrate graveyards, ghouls devour helpless passersby, and incubi stalk dark alleys and seedy nightclubs in Italy’s capital. Deep in the Vatican, a brotherhood exists, sworn protectors of the earth, and they stand firm against monsters from the dark depths. Operating in secret and silence, they protect our world from the sinister, the etheric, and from the evils that exist beyond the Veil.

But it’s a lonely life, and Alain Autenberg knows that more than most. His lover was ripped from him years ago and he vowed never to get close to another soul again. Even when the loneliness presses down on him, and his empty heart cries out for something more.

Something more comes in Cristoph Hasse, a new soldier arriving in Rome to serve in the Pontifical Swiss Guard. Young, brash, and fitting in at right angles everywhere he goes, Cris struggles in the murky, deceptive labyrinth of the Vatican. Propelled forward by a past he can’t understand, Cris collides with Alain, and both men crash headfirst into the darkest secret of the Vatican… and of the world.


Alain Autenburg is an elite soldier in the Pontifical Swiss Guard that protects and defends the Vatican, but his obscure task of fighting dangerous supernatural elements along with his blunt and chain-smoking sidekick, Father Lotario, causes him to be aloof and secretive, which keeps him from fitting in with his peers.

Cristoph Hasse is the newest member of the Guard and is assigned by his commander to mentor under Alain. Like Alain, Cristoph is a man with secrets along with an attitude. Alain’s attraction to Cris is immediate, but the only time he acts on it is in his dreams. His heart is still wounded from the loss of his previous love 12 years before. Their mentorship starts off awkwardly until Cris and Alain gradually start to open up and develop a friendship. Unfortunately, the nature of Alain’s duties and his vow not to fall in love again force him to keep his distance, much to Cris’ annoyance and peril.

As a paranormal story, this was a lot of fun. The revenants, vampires, ghouls, wraiths, and incubi were so lovingly and meticulously described, that they invaded my nightly dreams. I loved the partnership and easy friendship between Lotario and Alain, the details of their investigations, the charms, the spells, and the special weapons. Abundant descriptions, historical and geographical details that felt accurate were very effective in conveying a sense of atmosphere. The action scenes and the near-death scenes were tense and heart stopping, and the mystery was very satisfying. The secondary characters, human and supernatural, were well developed and memorable.

As a romance, this was a little disappointing. Even though I love a slow-burn romance and sexual tension, there was so much push and pull between Alain and Cris that I was starting to get annoyed. For crissakes, it took an incubus to get these two together! Their sex, when they finally had it, was sweet and well worth the wait. The surprise ending was done well, but left me feeling somewhat bereft. I’m looking forward to a sequel that will answer some questions and show how Cris and Alain cope with the significant change in their relationship.
Posted by Nancy at 1:24 PM