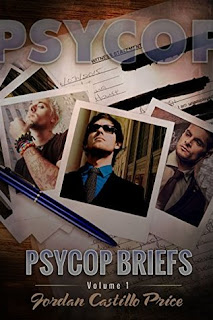 
Victor Bayne sees dead people for a living…and he sees them off the clock, too. After all, ghosts don’t confine their appearances to a psychic medium’s work hours.

From the macabre to the mundane, from titillating to tender, these PsyCop shorts feature stolen moments between the novels. Get a glimpse of Vic’s life with Jacob between cases, from both men’s viewpoints. Gain new insight on their psychic talents by accompanying them on odd jobs, shopping runs and family visits, or simply enjoy some downtime in the cannery.

The twenty short works range in length from flash fiction to novelettes, woven together to create a novel-length narrative of Vic and Jacob’s relationship from a fresh perspective. The stories are gleaned from various sources: anthologies, newsletters, and web, with four all-new pieces to tie the collection together and delve deeper into your favorite PsyCops' domestic life.

If you love Vic and Jacob in the PsyCop series, this is the perfect collection of stories to get your hands on!

While some of the stories stand well alone, others are better appreciated if you are acquainted with the characters from the series. I have not read all the books in the series yet, so it was a surprise to encounter characters I didn’t know, get a glimpse of the future, and see psychic abilities further developed. A few of the stories were familiar, but it was more fun to read them a second time as part of a collection.

Coffee O’Clock – Early on in their relationship, Jacob has spent nearly a week at Vic’s apartment, and while Jacob seems perfectly comfortable there, Vic is experiencing some anxiety. It’s fun to see Vic get all flustered when Jacob replaces his powdered creamer with half-and-half. I like being in Vic’s head, privy to all his neurotic insecurities and conversations with dead people. A little sad, but funny too.

Thaw - This sweet, humorous, short story shows a brief glimpse into the lives of Vic and Jacob, when they are not busy fighting crime. Who knew ice-skating could be so fun and sexy?

Stroke of Midnight – This is one of few stories where the reader gets Jacob’s perspective on events. It’s Vic and Jacob’s first New Year together, and they are planning to attend a party hosted by Jacob’s ex, Keith, but work calls and Jacob goes alone. It was nice getting into Jacob's head and knowing how strong his feelings for Vic are. I never knew Vic had a cleft chin.

No Sale – The flirtatious salesman and his fancy knives don’t have a chance with Jacob, not while Vic is seeing ghosts. I love Vic’s self-confidence in this one.

Most Likely To… – A nice little glimpse into 80’s hairstyles and Vic’s past.

Jock Straps on Sale – Vic needs some Florida water and Crash needs a ride. I love how Crash unsettles Vic and never fails to make me laugh.

Piece of Cake – Another short featuring Crash, this time while Vic is trying to bake Jacob a cake.

In the Dark – Vic is far more comfortable stuffing himself with meat pastries than making small talk with Jacob’s friends. An encounter with a ghost and a chat with Jacob’s ex, Keith, leads to mutual understanding.

Let the Chips Fall – Before I met my husband, my home was a mishmash of eclectic pieces I picked up at flea markets, yard sales, and from friends. I feel Vic’s pain. Why agonize over paint colors when white goes with everything?

Memento – Old t-shirts, yard work, and sweet lovin’. Told from Jacob’s point of view, his tenderness and desire shines through their relationship. Vic is so lucky!

Impact – I haven’t read the stories beyond Camp Hell, so seeing Vic help Jacob explore his own abilities was a nice surprise.

Everyone’s Afraid of Clowns – A creepy, unsettling story that is just perfect for Halloween. Vic and Jacob are out buying painted pumpkins for another party that Vic is not thrilled about attending. Jacob becomes curious when Vic recalls his first experience seeing a ghost clown in an old movie theatre. Instead of going to the party, they are off to hunt ghosts. Clowns are not the only scary things!

Waiting Game – Loved this short told from Vic’s partner Lisa’s point of view. She uses her precognitive talent to read between the lines, causing Vic and Jacob to blush.

On the Road – Vic and Jacob are planning to head out to visit Jacob’s parents. Jacob is very focused on his trip preparations and attention to details, while Vic is worrying about getting there too early. Hilarious little story that shows even Mr. Perfect can make mistakes.

Wood – Vic and Jacob are helping Jacob’s Uncle Leon put together some bookshelves. I love the stories that focus on lighter moments between the two men. This was fun, humorous, and sexy.

Off the Cuff – As much as I love clothes that fit well, I don’t envy Vic’s experience with the tailor. Still, it was a thoughtful gesture on Jacob’s part and Vic really needs some new clothes.

Locked and Loaded – This started out a little tense, with both guys on high alert. Jacob didn’t have his sidearm, but proved that a strong voice and confident stance goes a long way.

Inside Out – This is a fun little prequel to the PsyCop series and one of a few stories told from Jacob’s perspective. He and his partner, Carolyn, are going to his first PsyCop meeting. While he’s excited about it, Carolyn is more interested in fixing Jacob up with a new man. As Carolyn is a telepath, Jacob has to be very careful what he says to her. As much as I enjoyed this story, I think it would be better appreciated by gaining some familiarity with the characters and their world. Vic’s misadventure with a jelly donut is hilarious!

Witness – This story packs a punch! What starts as a dull training exercise that Vic has absolutely no interest in, turns into a satisfying mystery and further solidifies the bond between Vic and Jacob.
Posted by Nancy at 11:20 AM